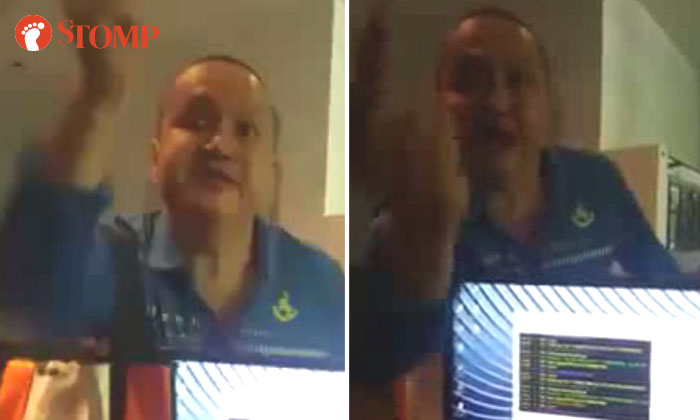 The police are investigating a case of a man caught on camera shouting and spitting at a security guard, they told Stomp in response to a query sent.

Several Stompers alerted us to a video of the incident circulating on social media.

Stomp understands that the incident took place in The Quayside condominium on Jan 9 at about 1.18pm.

The video starts with an angry man in blue shouting at a person, who is believed to be a security guard.

Throughout the video, string after string of swear words is yelled at the guard.

The man flails his hands around and points his middle finger at the security guard.

There is a table with a desktop between the man and the guard.

The former leans forward against the table, intruding into the space of the guard.

He asks the guard if he thinks he is a big f*** because he is the "supervisor" of the place.

He continues and says: "People talk to you nicely, you better understand."

He says something unclear to which the guard replies: "We follow the law."

The agitated man retorts by swearing and spits in the direction of the guard.

The man then questions the guard and exclaims: "What!"

The guard then asks the man if he wants the police to be called to the scene.

The man challenges the guard in a shrill voice: "Call police, call la.

"You think I scared ah?"

The video ends there.

In response to a Stomp query, the police said: "The police confirm that a report was lodged and police investigations are ongoing."

Related Stories
Man goes on a rant against driver of bus service 156 for driving too slowly
Premium Bus driver given warning after shouting at SBS Transit driver for honking at him 3 times
Man attacks 5 workers with penknife after allegedly challenging them to a fight in Sembawang
More About:
dispute
argument