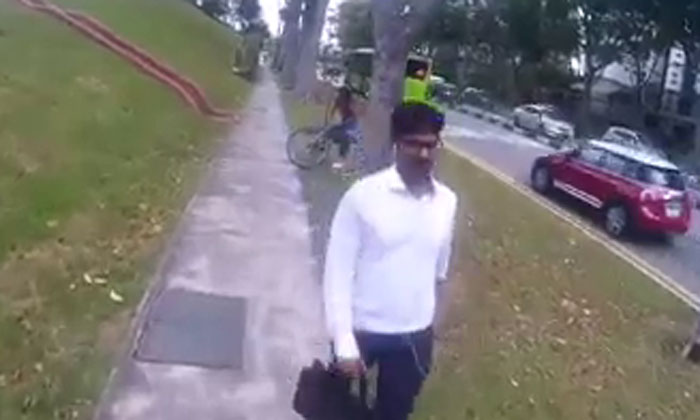 A cyclist and a pedestrian got into a heated argument after the cyclist accused the man of causing a woman to fall off her bike and walked away without helping her up.

Stompers Ah Mao and Anonymous alerted Stomp to the incident that was posted on Facebook. According to the post, this happened in Simei but it is unclear when it occurred.

In a video posted by Uniquely SG, a man in office attire is seen walking along the sidewalk.

A woman riding a bicycle and approaching the pedestrian from behind is seen losing her balance and falling off her bicycle in an apparent move to avoid him.

The man is seen glancing at her and continuing on his way while talking to someone on the phone through an earpiece.

Upon seeing what happened, another cyclist taking the video turns back to confront the pedestrian for just walking away without a second glance.

The man replies and says that he was on a call.

The cyclist then asks if the call is more important.

To which the man replies, "Whose problem is that?

He then goes on to say that the call was for work and agrees that it is "more important".

He then says that the walkway is not for cycling but the cyclist argues that it is "shared".

When the woman who fell off her bike approaches the men, the cyclist asks her if the man knocked her over.

She says that she thinks he was just not aware of her presence behind him.

The two men continue to argue over who has the "highest right" on the pavement.

The argument escalates as the cyclist accuses the other man of not being "human".

The pedestrian then suggests that they talk about it at the police station.

The cyclist says he is okay with that and asks the woman if she wants to go to the police.

The woman declines and just says that it is a good lesson for both of them to be more aware of others on the pavement.

However, the pedestrian continues to argue and asks how would he know that she was coming up from behind him.

She insisted that she did by ringing her bell.

The cyclist then goes back to the fact that the pedestrian didn't stop to help the woman up.

The pedestrian said that he asked but she said she was fine.

The cyclist also cannot seem to let go of the man saying his work call was more important.

Eventually, they part ways but the cyclist tells the man that he will post the video online. The other man who says he works at a bank tells him that if his reputation is ruined, he will sue him.

Most netizens were on the cyclist's side and agreed that the pedestrian should have helped the woman.

Related Stories
Grab suspends account of passenger who made unreasonable demands, went "berserk" and accused driver of hitting pregnant wife
Police investigating case of man hurling vulgarities and spitting at security guard at The Quayside
Man goes on a rant against driver of bus service 156 for driving too slowly
More About:
pedestrian
cyclist
dispute
argument