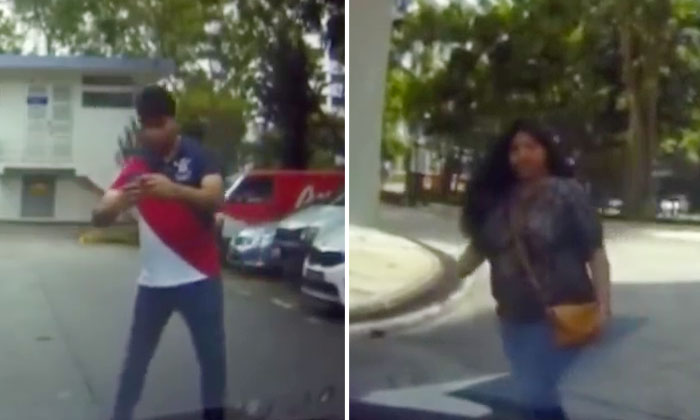 A Grab passenger's account has been suspended after he was caught on video arguing with a driver over his driving and accusing him of hitting his pregnant wife, a spokesman told Stomp.

Stompers Vader, Mohd and Dan alerted Stomp to a Grab driver's encounter with a couple that escalated quickly after the husband expressed dissatisfaction at how the driver handled "humps and bumps" on the road.

Grab driver Md Aza posted a video taken from his car's dashboard camera that recorded the quarrel between him and the male passenger.

He had picked up the man and his pregnant wife at an industrial area in Bukit Batok on Jan 13 at about 1.25pm, according to the video's timestamp.

Shortly after Aza picks the couple up, the man cordially asks him to drive carefully as his wife is pregnant.

Aza is heard saying he will try his best.

However, shortly after passing over a speed bump on the road, the man is heard telling Aza to drop him off if he can't "drive better".

As the passenger accuses him of "ignoring" his request, Aza says he is fine with dropping them off before their destination.

The passenger tells Aza that he is not satisfied despite Aza trying his best and says that he needs to drive slowly over the humps and bumps.

The passenger then goes on to describe rash driving under the Road Traffic Act to Aza's disbelief.

From the video, Aza hardly goes over 40kmh during the three-minute ride.

To the driver's credit, he remains calm throughout the ride until the passenger says, "If you don't understand the concern, then you are a crazy person".

"You cannot call me crazy la, I never call you crazy," Aza responds.

"You shouldn't call me crazy," he adds before calling the Grab hotline, presumably to make a report.

Aza wrote in his caption that at this point, the passenger went into "berserk mode" and demanded that he let him call the police first.

Aza is then heard repeatedly saying, "don't touch me" although whatever transpires in the car is not caught on camera.

The husband then shouts and accuses the driver of hitting his wife and his baby.

Aza is then heard saying to the wife, who enters the dispute, "I never hit you, don't lie!".

In response to a Stomp media query, a Grab spokesman said: "The safety of customers, drivers and passengers alike, is of absolute priority.

"Grab does not tolerate such behaviour and have temporarily suspended the passenger's account while we do thorough investigations. We are also in touch with the affected driver to provide support."

The video, which has garnered over 198,000 views since it was posted, has evoked sympathy from netizens for Aza.

Vader wrote to Stomp and said: "I feel the passenger was being unreasonable and I feel sorry for the Grab driver who kept quite calm throughout."

Related Stories
Police investigating case of man hurling vulgarities and spitting at security guard at The Quayside
Man goes on a rant against driver of bus service 156 for driving too slowly
Premium Bus driver given warning after shouting at SBS Transit driver for honking at him 3 times
More About:
grab driver
grab
passenger
dispute
argument