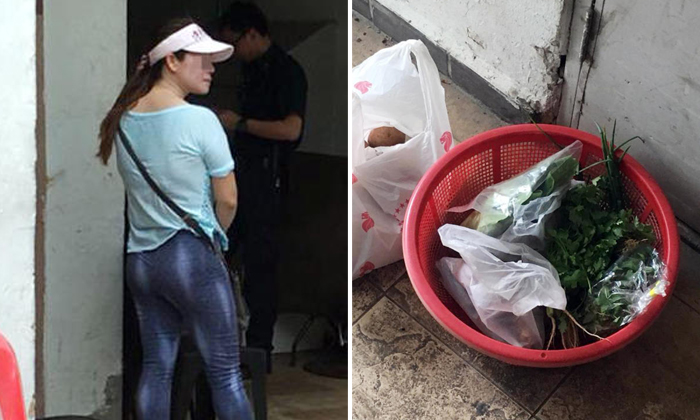 A 38-year-old woman who was arrested for allegedly stealing vegetables from a market in Yishun has been caught in the act on several other occasions before, according to staff at the stall.

A member of the public previously told Stomp that she heard a man shouting at the alleged thief: "You shiok or not? Shiok or not? Did I not give you money?"

The man is believed to be either the suspect's husband or a family member.

According to Lianhe Wanbao, prior to the incident, the suspect had been browsing vegetables at the stall just like other customers.

While staff were busy, the suspect picked up a bunch of vegetables from the stall and stuffed them into a plastic bag that she was carrying.

She did this repeatedly, not knowing that her actions were being watched by an employee.

Just as the suspect was about to leave, the employee shouted at her and uncovered the unpaid vegetables in her plastic bag, before calling the police.

The employee told Wanbao that the suspect was a repeat offender who had been blacklisted long ago, after having been caught in the act at the market many times.

"We all know her style. Our boss had noticed her actions from CCTV footage and told us to keep and eye on her," added the employee.

Although the suspect appeared calm when being questioned by the police, she immediately hid behind the staircase landing upon realising that reporters were at the scene.