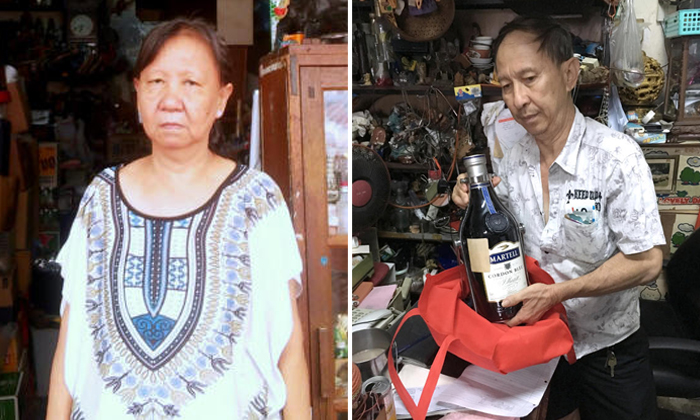 A youth walked into a liquor store in Little India with two friends on Monday and sought help for his bleeding leg.

Madam Irene Yeo, 58, the owner of Yeo Buan Heng Liquor Shop in Chander Road, recognised the 18-year-old teenager as one of her regular customers.

As she knelt down to dress his wound, his friends repaid her kindness by swiping some alcoholic drinks and hid them in their bags.

Madam Yeo discovered the theft only after they left.

As she had the youth's phone number from her sale records, she called to ask him if his friends had stolen her missing merchandise.

When he admitted to the theft, she said they had to return the items, which they did that night.

Madam Yeo told The New Paper yesterday: "I didn't want to report them to the police because they are still young and I took pity on them."

But she was in for a shock the next morning. Someone had broken into the shop and ransacked it.

Drawers had been emptied of cash and expensive liquor and cigarettes were missing from the shelves. Also gone were several cheques and cheque books.

Madam Yeo's brother, Mr John Yeo, 59, was horrified to discover the break-in when he arrived to open the store at 8am.

He told TNP: "I first noticed that the back door was slightly open. When I went in, the whole place was in a mess, with all the cash and cheques missing."

After Madam Yeo arrived, she called the police.

A police spokesman said they were alerted to the case of housebreaking by night at the shop on Tuesday.

They later arrested six youths - a 14-year-old, three 15-year-olds, a 16-year-old and an 18-year-old believed to be the teenager with the bleeding leg.

The Yeo siblings, who run the family business together, said the police had retrieved footage of the break-in from a police camera overlooking the back door of the shop.

Mr Yeo said: "The police showed us the footage and we recognised the boys from the earlier incident.

"They said they had arrested the boys and raided their homes and recovered some of the stolen items."

According to police receipts the siblings showed TNP, dozens of bottles of liquor have been returned, including two three-litre bottles of Martell cognac worth around $2,500.

The total amount stolen is unknown as police investigations are still ongoing, but based on the receipts, about $8,000 in merchandise was recovered.

Yeo Buan Heng Liquor Shop, which has been in business for about 80 years, moved to its current location 50 years ago.

It is well-known in the area, and Mr Yeo said match-fixing kingpin Dan Tan used to frequent the shop before his detention.

Madam Yeo said she felt betrayed by the youths, especially after she had taken pity on them.

She said: "I should never have given them a second chance.

The penalty for house-breaking by night is a jail term of up to three years and a fine.

Those convicted of house-breaking by night to commit a jailable offence can be jailed for up to five years and fined.

Those who intended to commit theft can be jailed for at least two years and up to 14 years.