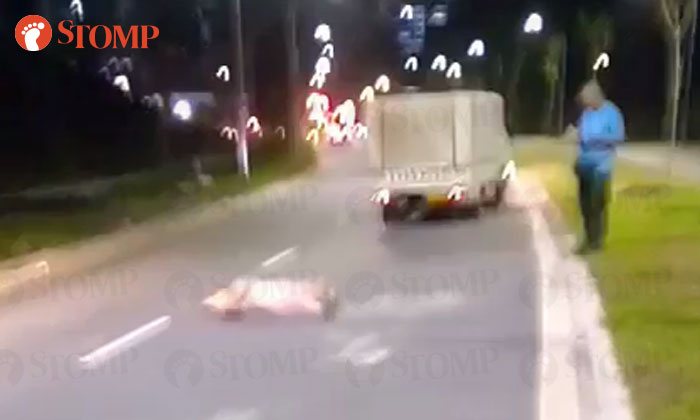 A male wild boar was euthanised after it sustained several injuries in an accident with a lorry at Bukit Batok West on Thursday night (Jan 24).

Stomper Nur alerted Stomp to the incident and shared a video that her husband had taken of the animal.

She told Stomp that her husband had been riding his bike when he saw a wild boar dash out onto the road from a forested area nearby.

It was hit by the lorry that was travelling in front of her husband.

In the video, the animal is seen lying on its side in the middle of the road.

In response to a Stomp media query, Mr Kalai Vanan, Acres' deputy chief executive officer, told Stomp that they received a call from a motorist about a wild boar struggling near Brickland Road and Bukit Batok West Avenue 5 at about 8.30pm.

"Our rescue team, together with our vet, attended to the case to rescue the boar," he said.

"Based on our assessment, the boar had spinal injuries which disabled it from being able to stand up.

"We had to, unfortunately, euthanise the animal."

Mr Kalai added that there has been an increase in boar sightings in the Brickland Road area.

"This could most likely be due to the land development happening in the area as well as feeding done by people," he said.