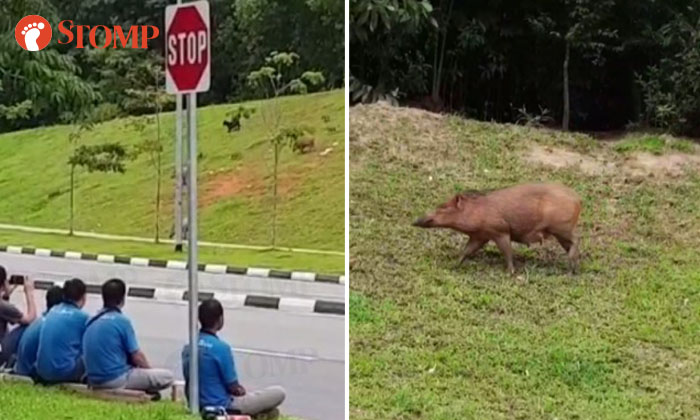 What do you do the first time you see a wild boar?

Stomper Mamacita thought to take a few videos and try to pet the wild boar. The latter is definitely not advised.

Last Monday (Dec 10) was the Stomper's first day of work as a security officer at the Vue 8 Residence located in Pasir Ris.

She was arriving to work when she saw the wild animal.

She said: "On my way to the building, I saw a pig.

"I had never seen one before, so when I told my colleagues they laughed and said that it was a wild boar.

"I knew what it was because I had read about it on Stomp before, but I had never encountered one."

She then went around outside the condominium to try and capture them on video.

She sent Stomp the videos she took at about 12pm that day.

One of the three videos first shows a brown wild boar strolling along a grassy slope.

Then, a whole group of wild boars come into view.

In the next video, the Stomper has a wider view of a large group of boars freely roaming.

There are tiny piglets, which the Stomper called "minis", running on the slope.

In the third video, the Stomper had walked to a nearby pathway opposite the condominium and encountered the brown wild boar.

She told Stomp: "I was with my colleague at that time and was really intrigued by the pig.

"I wasn't scared and wanted to go up to it to pet and sayang it a bit.

"But then as I was approaching it, the wild boar got scared and ran away."

The Stomper added: "I video-called my whole family to show them the wild boars.

"It was really very exciting seeing all the animals there.

"There were some air-conditioning company employees seated on the grass watching the pigs with me while waiting for their shift to start."

Here is some advice from the National Parks Board (NParks) for what to do when you encounter a wild boar:

Related Stories
Wild boars roaming in Pioneer aren't shy about getting close to humans at all
Man and son get upclose look at wild boar that's 'half the size of a car' in Punggol
Wild boars found trapped along Sime Road, trampling on each other and bashing against cage
More About:
wild boar
nature