Wild boar killed after getting hit by lorry outside Waterway Point 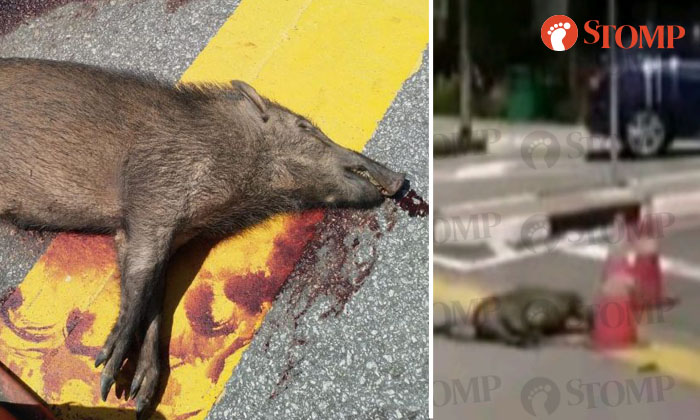 A wild boar was killed in a lorry accident outside Waterway Point shopping mall on Saturday (Jan 12) at about 11.55am.

Stomper Sean captured a video of the dead pig with his in-car camera at about 12.24pm, while he was passing by the area on the way to Punggol MRT station to drop his wife off.

He told Stomp: "While I was driving, I noticed police cars and the dead wild boar.

"I did not see any other vehicles that may have been involved in the accident."

In the video, the deceased pig can be seen lying on the ground in an area cordoned off by safety cones.

Police cars and a traffic police motorcycle were also at the scene.

He said: "Basically, with habitat loss, animals get lost and stranded."

According to The Straits Times, the wild boar had ran out of a carpark onto the road. It then got hit by a lorry and subsequently died from its injuries.

The lorry driver did not sustain any injuries.

In August last year, the Agri-Food and Veterinary Authority said it had received about 150 cases of wild boar-related feedback islandwide from January to July that year.

Director of Strix Wildlife consultancy Mr Subaraj Rajathurai told ST last year that many pockets of nature had been removed for housing development, therefore causing wildlife to lose their habitats and wander around looking for food.

He said: "We have encroached on their homes, where do you expect them to go?"

In a previous Stomp report, Stomper Daryl and his son spotted a wild boar near SAFRA Punggol on Oct 13, 2018.

Daryl shared the same sentiments as Mr Subaraj and said that the construction of a town hub at Punggol, at an area which was once forested, might be why wild boars are appearing more often.

If you encounter a wild boar, the National Parks Board (NParks) advises you to:

Related Stories
Stomper trying to pet wild boar in Pasir Ris is exactly what not to do
Wild boars roaming in Pioneer aren't shy about getting close to humans at all
Man and son get upclose look at wild boar that's 'half the size of a car' in Punggol
More About:
wild boar
accident
lorry