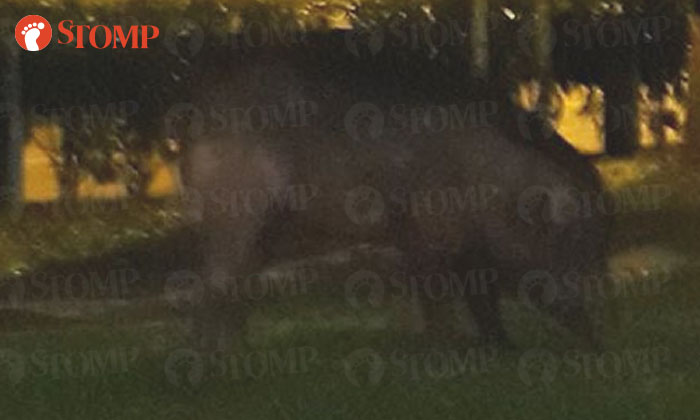 Stomper Anuar spotted a wild beast lurking under the cover of night at the carpark of Block 273 Bangkit Road on Jan 13.

It was past midnight at 1.01am and the Stomper was walking back home from his car alone.

Then he saw a silhouette of the creature about 50 metres away from where he parked his car.

He then recognised it as a wild boar and took a picture of it.

He told Stomp: "I was shocked when I saw the boar.

"I moved to Bukit Panjang in 2003 and this is my first ever encounter with a wild boar here.

"I saw the uninvited guest eating a mango under a mango tree.

"The boar has short tusks and I guessed that it was female because male hogs have longer tusks."

Anuar called the police at 1.13am to alert them to the wild boar.

Stomp understands that when the police arrived, the wild boar was seen walking back into a nearby forest.

Related Stories
Wild boar killed after getting hit by lorry outside Waterway Point
Stomper trying to pet wild boar in Pasir Ris is exactly what not to do
Wild boars roaming in Pioneer aren't shy about getting close to humans at all
More About:
wild boar
nature
police