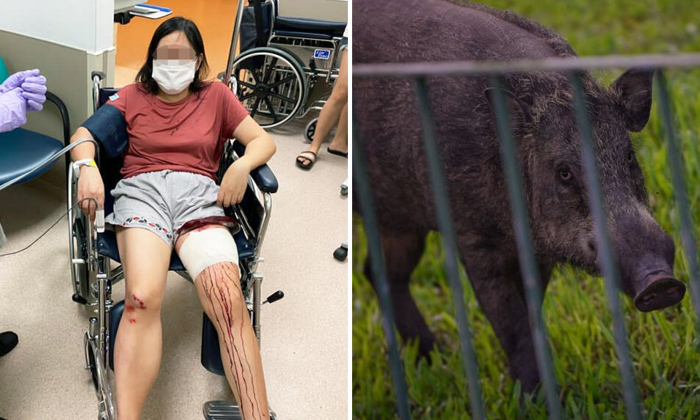 A woman was exercising in Sungei Api Api park when she was attacked by a wild boar on Tuesday night (Nov 17).

According to Shin Min Daily News, the 50-year-old auditor, who wanted to be known only as Madam Yu, was walking home with her husband in the park at around 9.30pm when the pair sighted the animal near Pasir Ris Drive 3.

The wild boar emerged from the foliage to her left and charged at her, Madam Yu told Shin Min.

"I felt a lot of pain in my left leg when I was knocked down," she added.

The boar ran away after charging at her. The whole incident happened in a matter of seconds.

It left Madam Yu with a 10cm-long laceration on her left leg and facial injuries, reported Shin Min.

Her husband rushed home to get the car and drove her to the hospital, where she is expected to stay until Sunday.

Madam Yu told Shin Min that she cried the whole night because of what had happened and does not dare to return to the park to exercise.

Responding to queries from The Straits Times, the National Parks Board (NParks) advised the public to avoid feeding wild boars as this might cause them to associate humans with food providers and therefore approach them.

"This may lead to them displaying aggressive behaviour towards people, venturing into urban areas in search of human sources of food and wandering onto roads, posing a potential danger to motorists and to themselves," said director of wild life management at NParks How Choon Beng.

The last reported incident of a wild boar attack was on Aug 28, 2018, near Punggol Secondary School, when a pregnant woman was left with deep cuts on her right calf.