Video: Wild boar charges at SUV before ramming into it along Upper Bukit Timah Rd 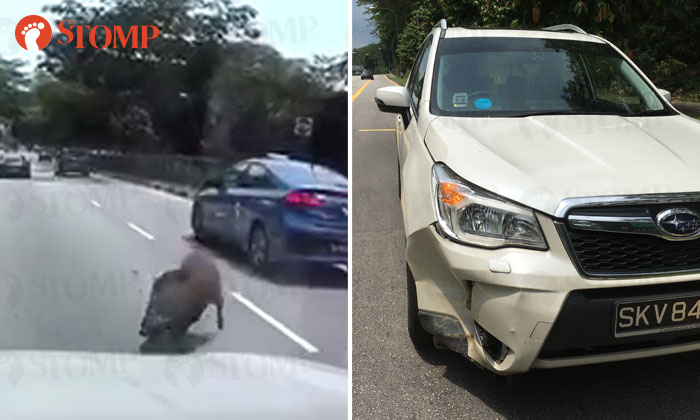 A wild boar was seen charging across Upper Bukit Timah Road and ramming into an SUV before dashing into a forested area at about 1.45pm on Oct 13.

Stomper Michelle alerted Stomp to the incident and said the boar severely dented the car her father was driving.

Michelle's family was travelling towards the city when the wild boar dashed across four lanes and smashed into their SUV.

Michelle said: "The boar collapsed upon impact but two seconds later, returned to its feet and dashed back towards the forested area from where it came, likely Bukit Batok Nature Reserve."

She told Stomp they sent the car for repair following the incident which cost them $1,241.

"We hope Stomp can help to raise awareness of such dangers to road users and what to do in such an encounter," she said.

"If the charging boar had instead collided with a pedestrian or cyclist with such impact, the consequences would have been dire.

"We also wonder if the Animal and Veterinary Service (AVS) is going to wait until someone dies from a wild boar attack before something is done to manage these wild animals."

Michelle has since reported the incident to the police and AVS.