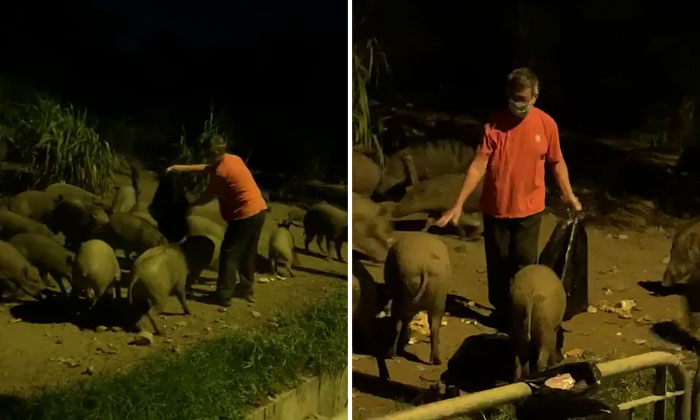 Nine people caught feeding or watching wild boars at Lorong Halus over the weekend will be charged for breaching the circuit breaker measures.

They will be charged for offences under the Covid-19 (Temporary Measures) Act, for carrying out non-essential activities or gathering at the site despite being from different households.

Three men caught during an operation by National Parks Board (NParks) officers are believed to be the same ones in a widely circulated video, in which one of them feeds a herd of 15 to 20 wild boars with bread from large plastic bags tossed towards him by two other men.

The video was shared by Facebook group Our Singapore on Saturday, though it is not known whether it was shot during the circuit breaker period.

Six other people were caught on separate occasions during the same operation, said Dr Adrian Loo, who is group director of the Wildlife Management at NParks.

NParks had repeatedly over the years cautioned the public to keep a safe distance from wild boars when encountering them, after reported attacks on passers-by.

An incident in 2018 saw a pregnant woman viciously attacked in Punggol by a wild boar, leaving her with deep cuts and serious bleeding. The boar was said to be from Lorong Halus, which was a few kilometres from the site of the attack.

NParks also warned that people should avoid approaching or attempting to feed the wild boars, as these animals are unpredictable in their behaviour and may pose as a risk to public safety.

In addition, Dr Loo said that feeding wildlife could have "adverse effects on humans, the animals, and the balance of the ecosystem" as this will make the animals more reliant on humans for food.

This could lead to increasingly "aggressive behaviour towards people, venturing into urban areas in search of human resources of food and wandering onto roads", which would pose a danger to motorists and themselves.

Furthermore, processed foods is unsuitable for wild animals and could cause them health problems, Dr Loo added.

He said the new Wildlife Act that comes into force later this year will enable NParks to take action against the feeding of wildlife without the Director-General's approval.

In tandem with the circuit breaker which started on April 7 to curtail escalating Covid-19 infections, a new law was passed in Parliament the same day which bans all social gatherings with people who do not live in the same household and stipulates that individuals can only leave their homes for essential activities.

For flouting these rules, individuals could be fined an amount not exceeding $10,000, jailed up to six months, or both. Penalties will be doubled for repeat offenders.