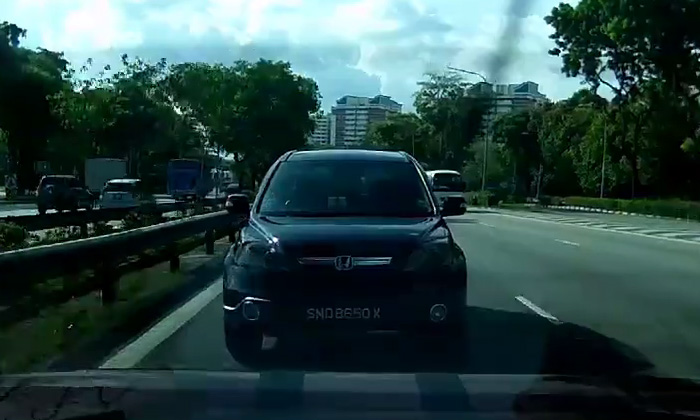 A Honda car was caught on video swerving from right to left while tailgating another vehicle on the first lane of an expressway.

Facebook user Aaron Ong uploaded a video of the incident on the Singapore Taxi Driver Facebook page, showing a Honda tailgating his vehicle for over a minute.

The car then overtook him via the second lane of the expressway, before speeding and filtering back into the first lane after overtaking three cars in front of him.

Here's a view from the front of Aaron's car when the driver overtook him.

According to the time stamp on Aaron's video, the incident happened at about 3.30pm on Oct 15.

The location of the incident is unclear.

"Seriously, I do not know what you want," Aaron said in the caption occupying the video.

"Do you want me to give way to you just because of the way you were driving?"

The video had gathered mixed reactions from Facebook users online.

Some criticised Aaron for not being considerate to the man.

Facebook user Sam Seah said: "Perhaps, take a look at it from another perspective.

"Maybe he needed to attend to an emergency, or maybe he is late for something important.

"If an ambulance, fire engine or police car was behind you, would you give way?

"If yes, then why not to this vehicle?"

Other Facebook users were more sympathetic to Aaron, criticising the other driver instead of tailgating.

Yao Saowee said: "A good driver would just overtake instead of tailgating."

Max Lim also added: "If you are driving within the speed limit, don't care about the driver tailgating you."

Related Stories
Stomper applies "emergency brake to the max'' to avoid collision with reckless driver
'Stationary' car in middle of the road suddenly swerves into Stomper's lane along Airport Boulevard
9-year-old traumatised after near-crash with car that 'accelerated even though we were close'
More About:
reckless
bad driver
dangerous driving