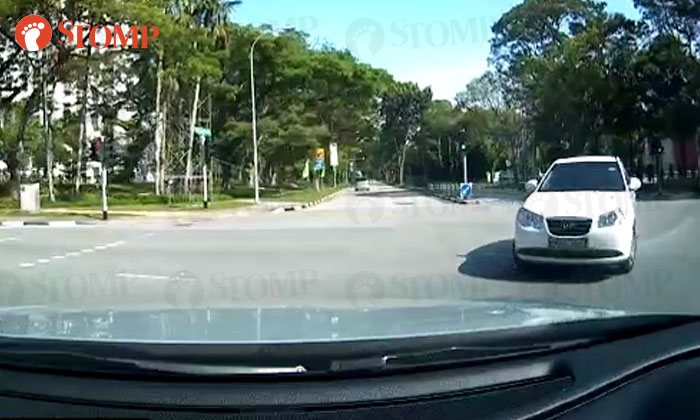 Stomper Kelvin was driving along Boon Lay Drive at 4.12pm on Sunday (Sep 23) when he and his family came across another driver who almost collided with their car.

At that time, Kelvin's wife, as well as his two children -- aged eight and nine -- were in the car with him.

In a footage taken from his dash camera, a white car with the plate number 'SJS1402Z' is seen turning out from a lane just as Kelvin's car was passing by.

Kelvin then swerved slightly to the left to avoid a collision.

"The white car in the video accelerated even though our car was close," said Kelvin.

"At that point of time, my two children -- aged eight and nine -- were seated at the back.

"My nine-year-old, who was sitting on the right side behind my driver's seat, was badly traumatised because the car was coming towards him.

"He kept saying he was scared and was shivering too. Last night he also woke up from his sleep shouting and screaming.

"He didn't say what he dreamt of when I asked so I don't know if it was because of this incident, but he doesn't usually have nightmares like that.

Related Stories
2 buses stop in yellow boxes at Tampines and Pasir Ris -- within a span of 25 minutes
Merc driver can't keep to lane on MCE -- and there's a reason why
Rider taken to hospital after crashing head-on into Toyota that made illegal U-turn across 5 lanes
More About:
dangerous driving
reckless
car