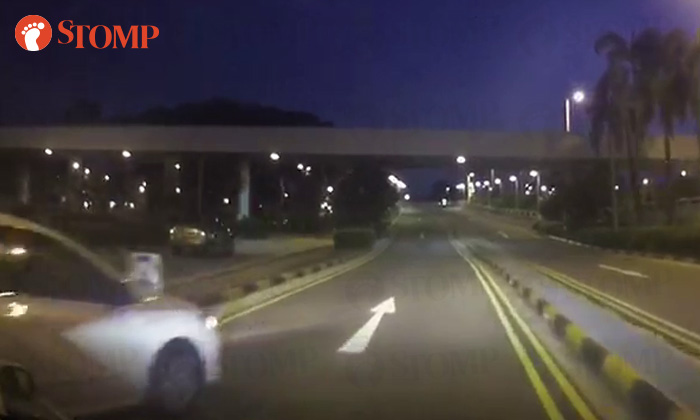 A stationary car swerved into the Stomper Michael's lane as he was driving past it along Airport Boulevard in front of Terminal 3 at Changi Airport at about 7pm on Sep 28.

Michael was driving towards the carpark of Terminal 3 when he spotted a stationary car on the chevron markings in between two diverging roads.

As Michael was about to drive past the car, it swerved into his lane.

In a video he shared with Stomp, the stationary car was seen stopping without any hazard lights on.

"I was driving when I saw this car stopped in front of me," said Michael.

"As I was about to pass it, he just suddenly swing out into my lane.

"Luckily I managed to brake in time.

"Otherwise, he would've hit me.

"He did not apologise and just drove off afterwards.

"I am sharing this to show other drivers that they should be wary of such drivers.

Related Stories
Stomper applies "emergency brake to the max'' to avoid collision with reckless driver
Car makes illegal right turn near NUH despite Stomper's warning honk
9-year-old traumatised after near-crash with car that 'accelerated even though we were close'
More About:
reckless
bad driver
dangerous driving