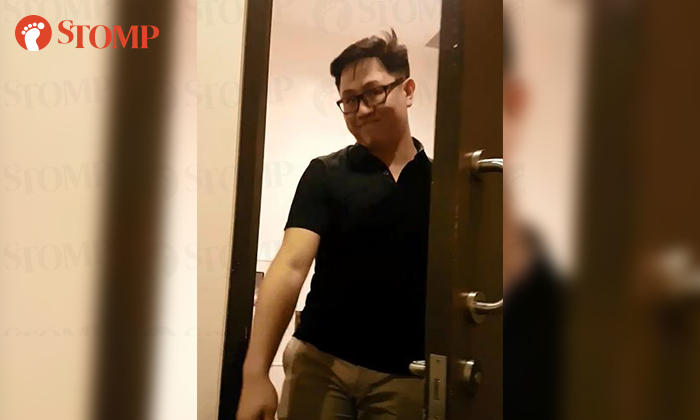 A wheelchair-bound woman waited nearly 10 minutes outside a handicap toilet at AXA Tower only to find out that an able-bodied man was using it.

Stomper Cai had recently undergone an operation for her ankle so she was unable to walk and had to use a wheelchair.

In a telephone interview with Stomp, Cai said, "I saw that the handicap toilet was locked so I knocked softly to ask if anyone was using it."

She then heard a male voice from inside the toilet shout rudely, "Yeah, I'm inside!"

According to the Stomper, she had heard noise coming from the toilet and suspected he was watching a video in the toilet.

Cai then decided to start recording to see how long she would have to wait before the man would come out of the toilet.

She filmed for about eight minutes straight before the man came out of the toilet.

In the eight-minute video, she is seen using her crutches to hit the door but the man inside did not respond.

"If he had told me he had diarrhoea or something I would have understood, but he didn't even acknowledge that he was coming out," Cai told Stomp.

With no response despite knocking on the door using her crutches, she is then seen asking a man for help in Chinese.

The man then asked her if the man was coming out, to which she replied that she doesn't know but that she really wants to use the toilet.

The man then helps to knock on the toilet door on the Stomper's behalf.

This time, the man inside the toilet acknowledged the man with a 'yep'.

The man eventually came out of the toilet and apologised to the Stomper.

Cai said, "I find that this guy was just using it out of convenience to watch videos inside."

Adding that the man was 'very inconsiderate', she said, "I feel that any able-bodied person should refrain from using the handicap toilet."

Related Stories
People queue up to take lift for priority users while wheelchair-bound woman is left waiting
Man urinates on corridor pillar, then lies down for nap a few metres away
NPCC responds to students in uniform throwing away unused rations in Changi
More About:
handicap
inconsiderate
toilet
wheelchair