Man urinates on corridor pillar, then lies down for nap a few metres away 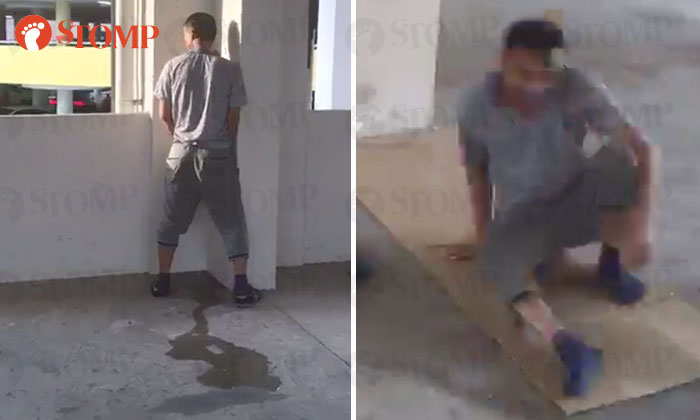 Stomper Joseph was passing by the 4th story of Block 32, New Market Road when he noticed a man urinating near one of the pillars.

He quickly took a video of the incident and sent it to Stomp.

In the video, a meandering stream of liquid could be seen pooling on the floor.

After the man was finished, he went off to another corner and lay down.

According to Joseph, who lives on the same block, there are no residential units on the 4th floor of the block, and this was not the first time that people have dirtied the halls.

Said Joseph: "This is so unhygienic.

"Sometimes, workers would gather here on their off days to have meals and drink at the halls.

"They often leave rubbish behind."

He added that always cleaning up after them isn’t a good long-term solution, and more should be done to prevent them from dirtying these public spaces.

Related Stories
Ew! Father and son prepare freshly brewed drink at McDonald's
Boy seen relieving himself in full view of other diners beside restaurant at Ang Mo Kio Ave 3
Was he on drugs? Man with bloodshot eyes pees on train -- while swaying from side to side
More About:
inconsiderate
unhygienic
urine
peeing