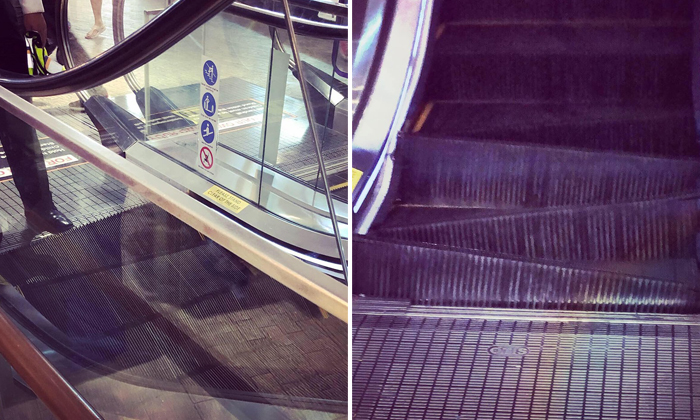 An escalator on the ground floor of Waterway Point shopping mall in Punggol had its steps dislodged on Saturday (Sep 28).

Facebook user Melissa Chong posted photos of the incident that occurred at around 11.45am and said "people were on the escalator were sent tumbling".

Chong also said it was a "near-miss" for her as she was "two steps away" from getting on the escalator, adding that security personnel responded very quickly.

She wrote: "[In] less than 5 mins, they were on the scene and directing traffic away. Thankfully no one was seriously hurt."

According to The Straits Times, a spokesman for Waterway Point said the steps on the escalator at level one had dislodged and the escalator was said to be out of order.

No injuries were reported in the incident.

The affected area was cordoned off, with security personnel on site to re-direct customers.

"Shoppers are reminded to take care while using escalators, especially when handling trolleys or prams. We regret any inconvenience caused," added the spokesman.

The mall's management is also working with the authorities to investigate the incident and the escalator will be restored to service once it is verified to be safe for operational use.

Related Stories
Woman suffers deep gash on shin after side panel from escalator at City Hall MRT Station dislodges
Family of 3 injured after falling and 'rolling down' escalator at King Albert Park MRT station
Boy taken to hospital after SCDF uses rescue tools to release his foot stuck in escalator at Jewel
More About:
escalator