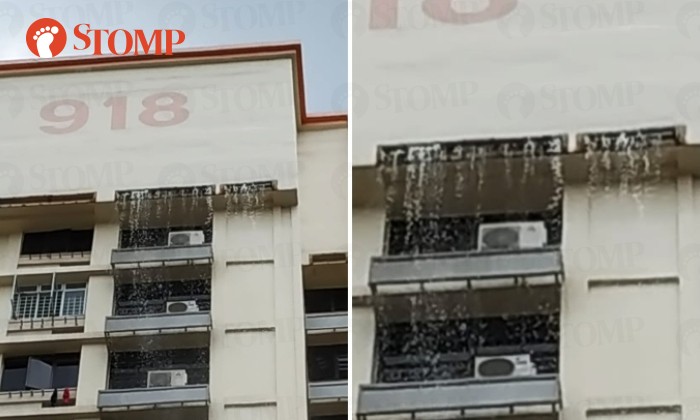 Stomper John was eating lunch at a coffee shop on Tuesday (Dec 15) when he suddenly heard water pouring down onto the ground.

Thinking it was the sound of a sudden downpour, he looked outside and noticed that water was gushing down from the rooftop at Block 918 Hougang Avenue 9.

"The heavy splashing noise was loud, so my colleague and I thought that there was some kind of leak," John said.

"I don't think that they're doing cleaning, because cleaning doesn't quite look like this.

"I also noticed that the residents didn't care about the water flowing down, they were just walking around it."

In response to a Stomp query, a spokesman for Ang Mo Kio Town Council said: "We conducted a water tank cleaning at Block 918 Hougang Avenue 9 on Tuesday (Dec 15)."

The spokesman added that residents have been informed on Dec 9 via notices that were placed at the lift lobby and staircase area of the ground floor.

"During the water tank cleaning, there were sightings of water gushing from the rooftop," said the spokesman.

"There was no water leakage and water supply to residents was not disrupted."