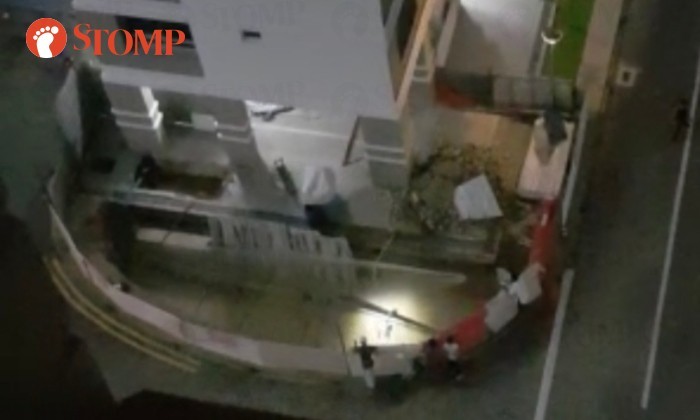 When Stomper Anonymous heard a loud sound from the foot of her block in Pasir Ris, she immediately went to check it out.

Turns out, a pipe joint had dislodged and the Stomper noticed water flowing everywhere.

The incident, which happened at Block 229 Pasir Ris Street 21 on Nov 9 at 11pm, was caught on video.

In the video, the sounds of water flowing can be heard in the background as a few passers-by gather to watch.

"This happened at 11pm and lasted for about an hour," Anonymous said.

"I heard a loud sound and realised it sounded like super heavy rain -- but ten times louder than that.

"We stay on level 12 so I couldn't really tell what was going on. My husband ended up heading downstairs alone to see what happened as my baby was sleeping.

In response to a Stomp query, a spokesman for Pasir Ris-Punggol Town Council said: "We wish to clarify that the pipe joint dislodgement incident was not a burst pipe and that it was reported on Nov 9 at around 11.30pm."

The spokesman added that the town council ensured that all residents of the affected block had access to emergency water supply within three hours of receiving the feedback.

"Rectifications to set back the pipe joint were also completed on Nov 10 before 9am," said the spokesman.