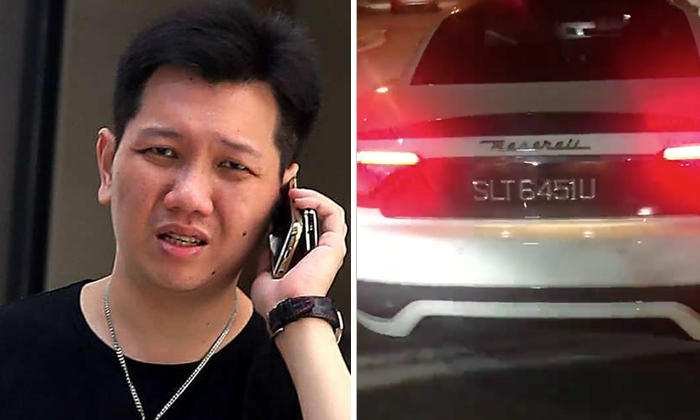 Lee was arrested on Saturday morning (Nov 18) and charged in court for a rash act causing grievous hurt.

A video of the Maserati driver fleeing the scene after the accident was captured and uploaded onto Facebook by user Yan Han.

In the video, a motorcyclist attempted to give chase to Lee but was unable to keep up with his Maserati.

According to an initial official statement from the police released on Saturday (Nov 18) at 1am, it was looking for Lee, who had accelerated his Maserati towards an on-duty Traffic Police (TP) officer when stopped during an enforcement check along Bedok Reservoir Road at around 9.20pm on Friday (Nov 17).

The officer suffered multiple injuries and was conveyed to Changi General Hospital for treatment.

In an updated statement at 4.21am, the police said that officers have tracked down and arrested Lee at a Housing and Development Board (HDB) unit in Geylang Bahru Road.

Lee’s Maserati had earlier been found abandoned at Cedar Avenue.

This was not Lee’s first offence.

In July 2017, Lee was fined $13,500 for an illegal modification on his Maserati - installing an altered exhaust system on it - and also causing an accident at Orchard Road in 2016, which saw a motorcyclist being injured.

Lee has been caught a total of eight times between May 2013 and November 2015 for usage of the altered car.

For his latest offence, he was charged with the offence of rash act causing grievous hurt in court on Saturday morning.

Related Stories
Injured cyclist appealing for information after hit-and-run along Admiralty Road West
Kia driver, don't think you can get away with reversing into another car and driving away
Driver knocks over motorcycle at carpark opposite Wheelock Place, then just drives off
More About:
traffic police
injured
maserati
hit-and-run