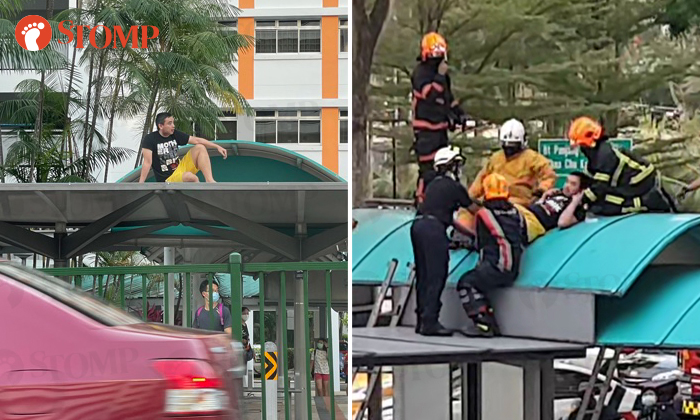 A 29-year-old man was apprehended after being seen sitting and walking on the roof of a bus stop along Bukit Panjang Ring Road on Friday (Feb 26).

Stomper Judy, a resident in the vicinity, was driving by the scene at around 6.40pm when she noticed the man on the roof.

She recounted: "I saw him on the green roof at first. He then stood up to walk forward and sat on the grey ledge."

Judy, who took a video and photos of the man, also called the police.

Other videos circulating online show the man lying down and strolling along the roof of the bus stop, as well as ignoring the authorities. 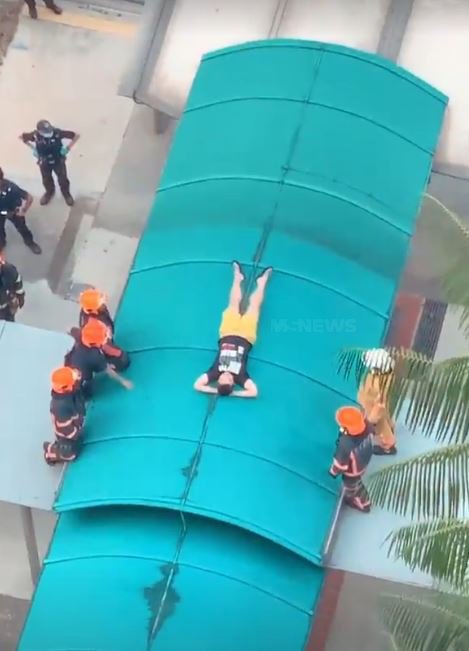 Stomper Salty witnessed the scene unfolding at around 7pm and shared a video showing Singapore Civil Defence Force (SCDF) officers removing the man from the roof.

Salty told Stomp: "I saw SCDF and police vehicles by the roadside.

"There were officers on the scene. They talked to the man for around 30 minutes before moving him from the curved roof to a flatter ledge to restrain and remove him from the top.

"The officers spoke to the man, who seemed to be physically unhurt. They acted professionally.

"I hope the man is doing well and I wish him all the best."

In response to a Stomp query, the police said they received a call for assistance at 6.14pm about a man sitting on the roof of the bus stop along Bukit Panjang Ring Road.

"The 29-year-old man was apprehended under Section 7 of the Mental Health (Care and Treatment) Act," they added.

A spot with a view. Guy decides to take a nice viewing spot on top of the covered walkway along Bukit Panjang Ring Road...

Related Stories
Man, 76, involved in criminal intimidation case apprehended after locking himself in Bendemeer flat
Police force entry into Woodlands flat and apprehend man who locked himself in
Man enters sleeping neighbour's home and kisses her, threatens to jump down Tampines block in 3-hour drama
More About:
rescue
unusual
arrest