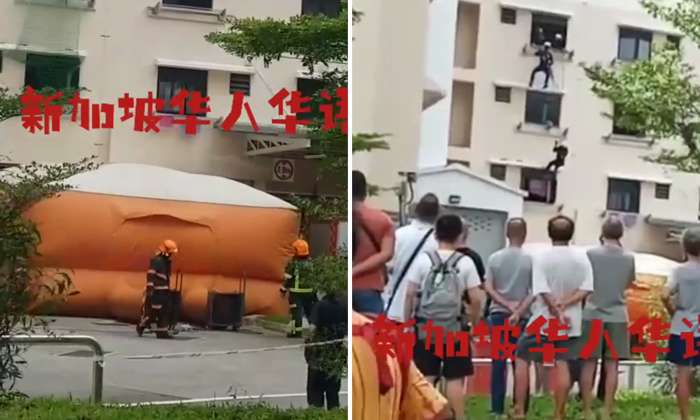 A 33-year-old man was arrested for criminal trespass and outrage of modesty after a three-hour standoff with the authorities in Tampines on Monday (Jan 18).

The drama began at Block 885A Tampines Street 83 at around 11am.

According to preliminary investigations, the man had purportedly entered his neighbour's unsecured unit and kissed a woman several times while she was sleeping alone inside.

"The woman woke to the situation, screamed at the man to leave the unit and contacted her family member for assistance," said the police in a statement.

The man then went back to his unit and locked himself in.

The police said they were alerted at around 12pm to a case where a man alleged that someone wanted to beat him. When they arrived, they found the man locked inside his unit.

"There were also two persons outside the said unit who were observed to be confronting him," police added.

"They were advised by officers to stay away from the unit."

The man continued refusing to open the door despite the officers' repeated calls to do so. He also threatened to jump down from his unit.

A video circulating online shows SCDF officers scaling the block. Several onlookers had also gathered at the foot of the block to watch the scene unfold.

In response to a Stomp query, the SCDF said it received a call for assistance at around 1.10pm.

A safety life air pack and nets were deployed. Rescuers from the Disaster Assistance and Rescue Team (DART) were also on standby as a precautionary measure.

After hours of engagement, the man finally heeded instructions and opened his door.

According to Shin Min Daily News, the stand-off lasted three hours until 3pm, when the man was arrested.

The man was taken to Changi General Hospital and subsequently referred to the Institute of Mental Health for psychiatric assessment.

The female neighbour, 29, told Shin Min that she had been working from home when she felt tired and went to take a nap in the bedroom. However, she forgot to lock the door.

She recounted: "The man suddenly pinned me to the bed and tried to kiss me. I was shocked."

She said she screamed loudly as well as shouted at the man, thus alerting neighbours, who came to check what had happened.

"I then contacted my fiance and relatives to come over and help," said the woman.

When her family arrived, they tried knocking on the man's door but he refused to come out.

The woman said that she had been neighbours with the man for over six years, and he would occasionally ask her fiance for cigarettes or loose change.

"My fiance was quite nice to him and therefore became even more angry when he learned of the incident," she added.

"However, I have always found his behaviour strange and rarely interacted with him."

The man was formerly a food deliveryman but has stopped working for a long time, another resident told Shin Min.

The man will be charged in court on Wednesday (Jan 20).