Man, 76, involved in criminal intimidation case apprehended after locking himself in Bendemeer flat 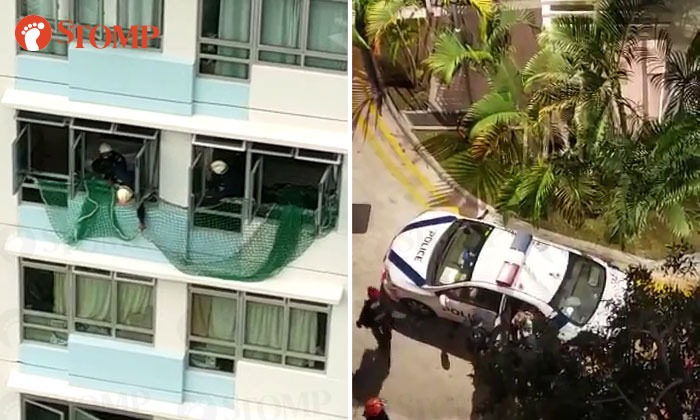 A 76-year-old man was apprehended after locking himself inside a residential unit at Block 38C Bendemeer Road on Feb 10.

Stompers Irfan and Anonymous alerted Stomp to the incident and shared videos they took.

In the videos, police and Singapore Civil Defence Force (SCDF) officers are at the scene. Officers are seen setting up a safety life air pack and nets at the block.

Several onlookers are also gathered at the foot of the block to watch.

The man is later seen being escorted to a police car.

In response to a Stomp query, the police said they were conducting an operation at the said location to follow up on a case of criminal intimidation at about 4pm.

"The 76-year-old man, who is believed to be involved in the case, refused to heed officers' repeated calls to open the door and locked himself inside his residential unit at the said block," a police spokesman said.

"As it was assessed that the man may pose a danger to himself and possibly others, officers took necessary precautions and exercised restraint whilst engaging the man."

At around 11.30pm, police officers managed to gain entry into the unit and apprehended the man under the Mental Health (Care and Treatment) Act and he was subsequently referred to the Institute of Mental Health (IMH) for further assessment.

No injuries were reported and investigations into the man's alleged involvement in the case of criminal intimidation are ongoing.