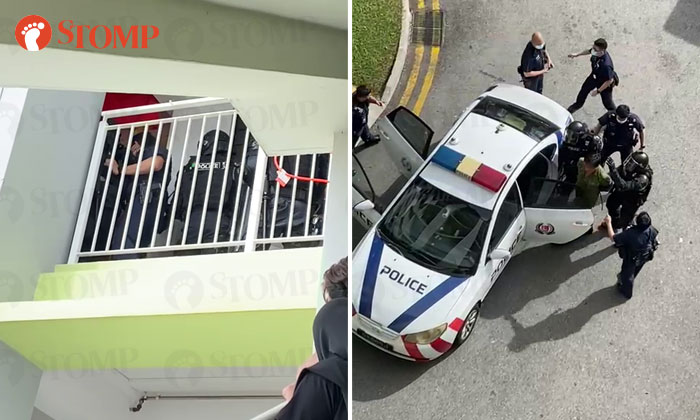 A 37-year-old man was apprehended after police forced entry into a unit at Block 569B Champions Way in Woodlands on Feb 5.

In the footage, shouting is heard after police break into the flat with several residents looking on.

Residents are then heard clapping and cheering as police escort the man into a police vehicle.

In response to a Stomp query, the police said they received a call for assistance from staff from the Institute of Mental Health (IMH) at about 9am.

"A 37-year-old male IMH patient had refused to cooperate with the medical staff and locked himself inside his residential unit at the said block," a police spokesman said.

"Upon arrival, the man refused to heed officers’ repeated calls to open the door.

"As it was assessed that the man may pose a danger to himself and possibly others, the officers decided to effect forced entry into the unit.

"At about 4.23pm, police officers gained entry into the unit and apprehended him under Section 7 of the Mental Health (Care and Treatment) Act and was subsequently referred to IMH for further assessment.