Cyclists block car and hurl vulgarities at driver at ECP 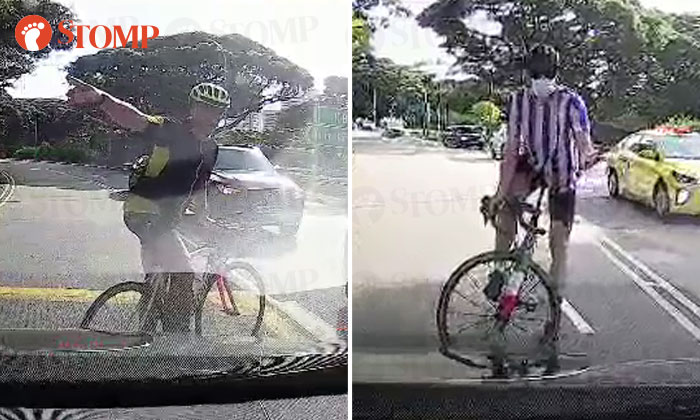 A Stomper was dumbfounded when he was the target of a bout of road rage from a couple of cyclists who were riding along East Coast Park Service Road on Sunday afternoon (Aug 30).

Stomper Chapo shared with Stomp he was driving along the service road and nearing McDonald's when he spotted a group of cyclists cycling ahead of him.

"They were cycling dangerously in two lines and I was behind them for a good four minutes before that," he said.

"The Mitsubishi Lancer in front of me signalled left and wanted the carpark near McDonald's so the driver accelerated and veered left to the carpark.

"Ironically, the cyclist in yellow was already gesturing his unhappiness when the driver in front indicated his intention to turn left.

"When the driver turned in, the cyclist in yellow dangerously cut in front of my car without checking his blind spot.

"I immediately sounded my horn at him to get his attention and had to jam on my brakes.

"My children sitting in the car were shocked by the incident."

The Stomper said that was when the cyclist rode in front of him and suddenly stopped his bike before shouting profanities at him.

"I brought down my window and told him he should have stopped and not cut into my lane," he said.

"I decided there was no point engaging him in dialogue since he could only spill vulgarities from his mouth so I decided to drive off.

"In the video, his friend decided to ride against traffic right up to him and wanted me to challenge me too.