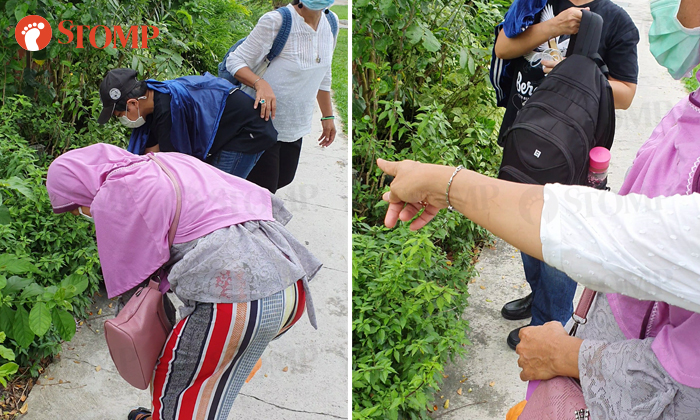 A parkgoer was concerned to see a group of women picking plants at Sembawang Hot Spring Park on Sunday afternoon (Nov 22).

Stomper Ong said she was at the park at around 2pm when she saw three women plucking flowers from a garden plot and placing them in a plastic bag.

Ong shared a video of her confronting the women, one of whom was holding the plastic bag, and asking them what they were doing.

The Stomper recounted: "Just before I took the video, they were putting small white flowers in an orange plastic bag.

"I realised it was a herbal garden and asked them why they were stealing flowers.

"They gave excuses about picking flowers but I had seen them digging something out.

"After I confronted them, they walked in the direction of the bus stop and I lost them. I hope they did not go back to do anything funny."

Under the Parks and Trees Act, damaging/removing plants or parts of plants from parks and gardens is not permitted. Offenders who cut, collect or displace any plant in these areas can be fined up to $5,000.

According to The Straits Times, the severity of the punishments may vary, depending on where the offence was committed and other mitigating circumstances.

Most roadside trees, which are typically in areas managed by the National Parks Board (NParks), also fall under the Act.

Can you collect or keep fruits that have fallen naturally to the ground then? No, that is prohibited as well.

Individuals and groups who wish to collect seeds, cuttings or fruits for research, education, propagation, charity or other purposes must approach the relevant authorities for permission.