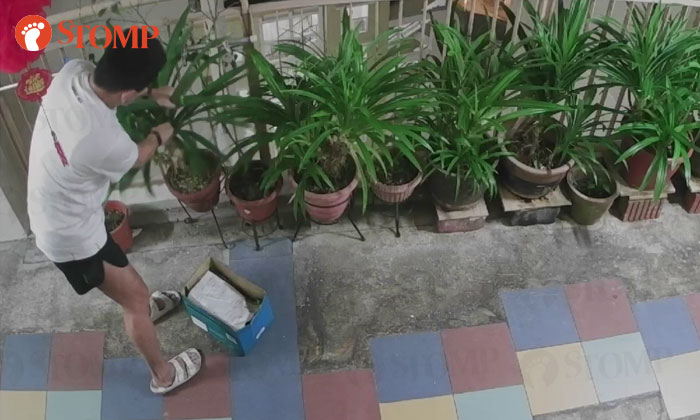 The police are looking into an incident where a man was caught on video cutting leaves from a potted pandan plant and walking away with them at Block 655B Jurong West Street 61 on May 17.

Stomper Anonymous alerted Stomp to the incident and shared footage from his family's CCTV camera that caught the man in the act.

"A few of our pandan leaves had previously been cut off and stolen so my family decided to install a CCTV camera in hopes of capturing the culprit," he said.

"On May 17, our camera managed to record footage of a culprit in action."

In the video, the man wearing a white T-shirt with the words "Above All" on it, black shorts and a pair of white sandals was seen approaching the plants in front of the Stomper's home with a box and a pair of scissors.

He then proceeds to cut some leaves from the pandan plant and walks away with them.

"We are unable to identify the face of the culprit because of the mask he is wearing," he said.

"A few of our neighbours have also had their plants stolen and damaged as well."

The Stomper added he wanted to share this to raise awareness and to encourage his neighbours to look out for their belongings.

He added: "The stolen property may not be of much value, but my grandmother has been spending years to nurture and grow them.

"She would be greatly affected, emotionally, every single time we realised her hard work had been stolen and damaged."

The Stomper has since made a police report.

The police confirmed with Stomp a report was lodged and are looking into the matter.