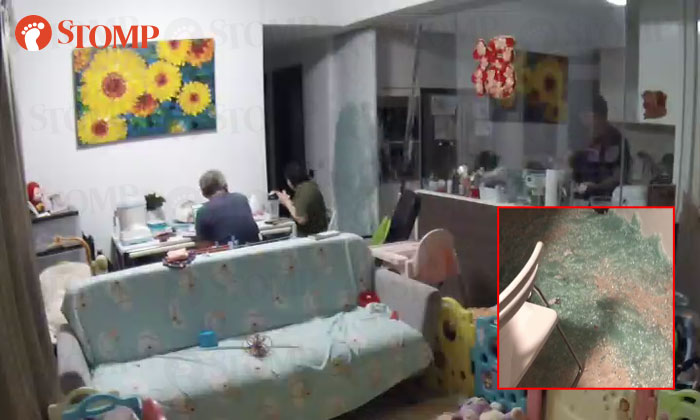 A family staying at the eCO condominium in Bedok was stunned when a tempered glass door suddenly shattered into thousands of pieces as they were going about their own business on Sunday night (Feb 17).

Stomper Felizia alerted Stomp to the incident and shared a video she took from her home's security camera capturing the exact moment the glass shattered at about 10.28pm.

In the video, Felizia and her father are sitting at the dining table while her husband is in the kitchen.

The glass door behind Felizia suddenly 'explodes' into pieces, causing a steel pole attached to the glass to fall to the floor.

"I feel lucky that the heavy steel pole didn't fall on me after the glass exploded, or else I might be dead," she told Stomp.

She was also relieved that her one-year-old baby was sleeping at the time because she usually likes to play next to the glass door.

Felizia said that she is the first tenant to rent out the apartment after the Far East Organisation property attained its temporary occupation permit (TOP) in 2017.

After informing her landlord and condo security about the incident, the family spent several hours cleaning the mess up themselves.

She also shared a video she took of the shattered glass on the floor where "cracking" noises could still be heard.

Felizia told Stomp she is also concerned because the apartment features several glass panels, around the kitchen and at the balcony.

In response to a Stomp media query, a Far East Organisation spokesman provided the following statement:

"The safety of our homeowners is important to us.

"A kitchen tempered glass door in one of the units at eCO shattered on Sunday night.

"Upon receiving the report from the homeowner the next day, we immediately visited the unit to ascertain that no one is injured and cleared away the remaining glass pellets.

"We will be replacing the tempered glass door soonest possible.

"The tempered safety glass used in the development fully meets the requirements and standards of the Building and Construction Authority."

Shaken from the incident, Felizia told Stomp she does not want another door.

"I think it is a very dangerous design," said the Stomper.

"I understand that tempered glass causes low impact when it shatters but my concern is the steel pole attached to the glass."

"I hope they will check the other glass panels in the flat and put protective sheets on them instead."

This is not the first incident where tempered glass has "exploded" in people's homes.

Last December, a Stomper received a replacement hob after her glass-top gas stove suddenly "exploded and shattered into smithereens".

According to glass experts, spontaneous shattering occurs only in tempered glass.

However, such cases are not common and when tempered glass implodes, it shatters into small pieces with rounder edges than that of normal glass, reducing the risk of injury.

Experts said tempered glass is about four times stronger than untreated glass as it is strengthened through heat, reports The Straits Times.

But the tempering process creates surface stress which, combined with nickel sulphide inclusions created during the glass manufacturing process, can cause the glass to spontaneously shatter months or years later.