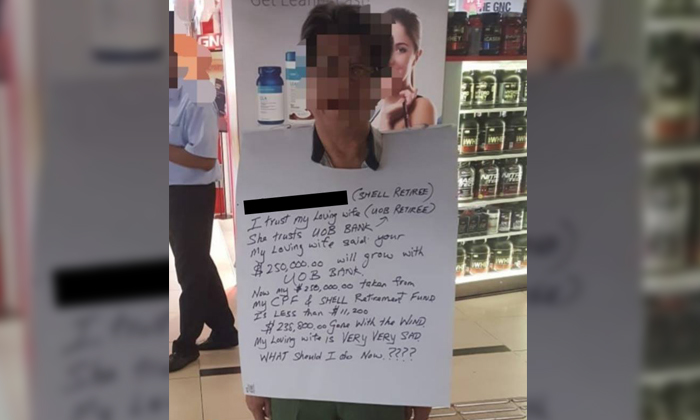 UOB is aware of a circulated photo that shows a man wearing a poster about his savings and has met with him to understand his concerns, the bank told Stomp in response to queries.

Several Stompers alerted Stomp to the photo, which was posted on Everyday SG's Facebook page on Sunday (Feb 10).

It is unclear when and where exactly the photo was taken.

However, a reader told Shin Min Daily News that he spotted the man outside Raffles Place MRT station on Feb 8, at around 11am.

Mr Chen, 40, said: "I was curious when I saw that he had hung a poster over himself and observed him for awhile. However, he was talking to someone on the phone so I did not approach him to ask more about his situation."

When Shin Min reporters arrived at the scene at around 12pm, the man was nowhere to be seen.

According to workers in the vicinity that Shin Min spoke to, the man had 'paraded' outside a bank for not more than one hour.

In response to a Stomp query, a UOB spokesman said: "We are aware of the incident and met with the gentleman to understand his concerns.

"Please be assured the Bank deals with every complaint promptly and fairly."