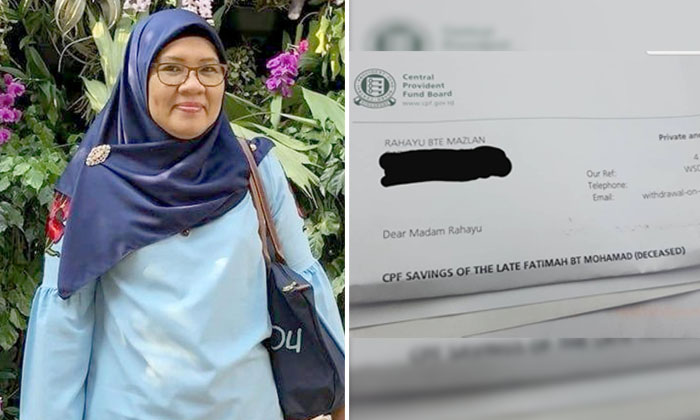 Rahayu Mazlan, a 51-year-old housewife, received payouts of an outstanding balance of under $2 from the Central Provident Fund (CPF) after 31 years, following the death of her mother.

She had received a letter dated Oct 4 from the CPF Board stating that as part of its "regular reviews", it had found some leftover savings in her late mother's account since the last withdrawal in 1987.

The CPF Board sent her a letter dated Oct 4 which said that it had found some leftover savings in her late mother's account since the last withdrawal in 1987, as part of its "regular reviews".

According to The Straits Times, CPF has asked her to submit a completed form and necessary documents by Nov 5 to claim it.

A CPF Board spokesman said in response to The Sunday Times' queries on Oct 20 that all of her late mother's CPF monies were disbursed within two months in 1987, except for a "small residual amount" which had been retained for a specific housing-related transaction.

The spokesman added and said: "This amount continued to attract interest until it was deducted several months later for the transaction. The interest accrued - which amounted to less than $2 - remained unclaimed."

Madam Rahayu said her mother, Madam Fatimah Mohamad, had worked as a production operator at a semiconductor firm and died of breast cancer when she was 42.

Her mother had divorced in 1972 and did not remarry, so being the only child, Madam Rahayu was the sole nominee for her mother's CPF savings.

She went to the CPF branch in Tampines on Thursday (Oct 18), a day after reading the letter, to seek an explanation.

"I was just curious about what's going on. The officer at Tampines was very nice but could not answer my queries, and I didn't want to hold up people queuing up behind me," Madam Rahayu told The Sunday Times.

She then shared the issue on social media, hoping to get to the bottom of the matter.

The CPF spokesman said the board makes every effort to disburse all unclaimed monies to beneficiaries and noted: "As part of our regular review of cases with unclaimed residual monies recently, our staff invited (Madam Rahayu) to make the claim."

In line with CPF legislation, all outstanding CPF balances in dead members' accounts will earn interest up to seven years from the date of death.

Thereafter, the interest payment will cease.

The CPF spokesman added: "We are in the process of contacting Madam Rahayu to explain the details to her.

"We are also reviewing the process of disbursing nomination monies to see how we can improve it further."

Related Stories
Dead man's CPF savings of over $170,000 will go to siblings instead of China bride
Woman wanting to borrow $3k gets $500 from moneylender -- but ends up forking out $2.6k
Beautician and 'middlewoman' in dispute over $200 worth of goods, point fingers at each other
More About:
facebook
money