Understanding driver accepts $1 compensation from cabby who scratched his Porsche 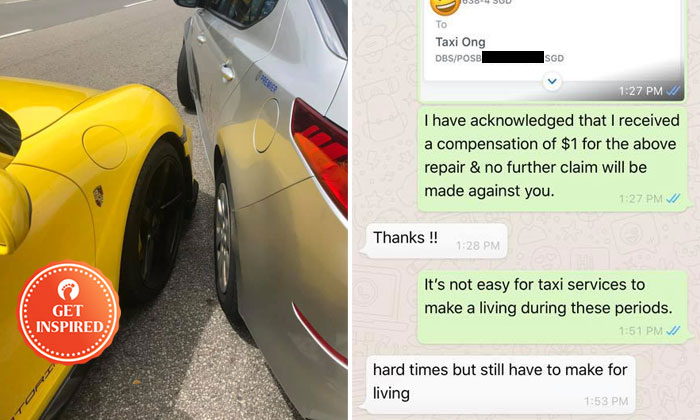 A Porsche driver is being praised for netizens for kindly accepting just $1 from a cabby who accidntally hit his car.

Earlier that day he was involved in a minor accident with a taxi that left his Porsche scratched.

He noted in his post that the cabby was "steady" and admitted it was his fault with no argument but added the cabby told him times are bad.

He shared a WhatsApp conversation between him and the cabby after the taxi driver had transferred him $200 in a private settlement.

He replied that he managed to get a cheaper reply and understood that driving a taxi amidst the spread of the coronavirus, or Covid-19, is hard and high risk.

He then offered to refund $199 to the cabby, keeping just $1 as compensation.

"It's not easy for taxi services to make a living during [this period]," he wrote.

Netizens commented on Fed's post, praising him for earning their respect.

Related Stories
Gojek driver finds bag on side of road containing 'stacks of cash' and goes extra mile to return it
Woman thanks kind soul who returned her valuables to police station in almost no time
Can't get surgical masks? 'Angels' are giving them out at Dhoby Ghaut and Punggol
More About:
kind
inspiring
porsche
taxi
cabby
accident
Covid-19