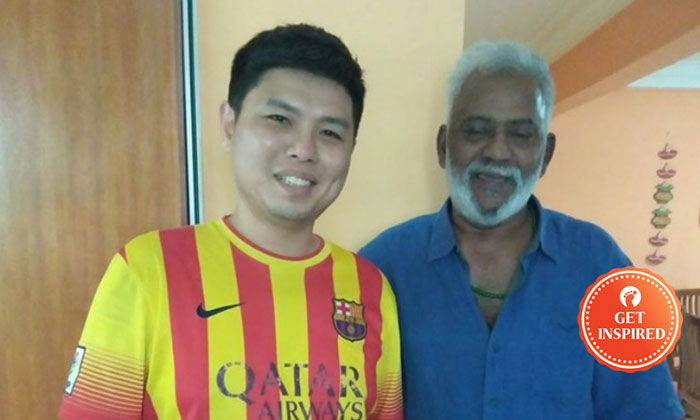 Gojek driver Andy Tan was driving along Hougang Avenue 6 on Jan 28 when he spotted a Louis Vuitton bag on the side of the road.

Upon discovering thousands of Singapore dollars and Malaysia ringgit inside, he proceeded to find out how he could return it to its rightful owner.

Needless to say, not everyone would have done so.​​​​​​

Calling Andy "one in 100", she said her uncle is a businessman who had visited Singapore the day before he lost his bag. 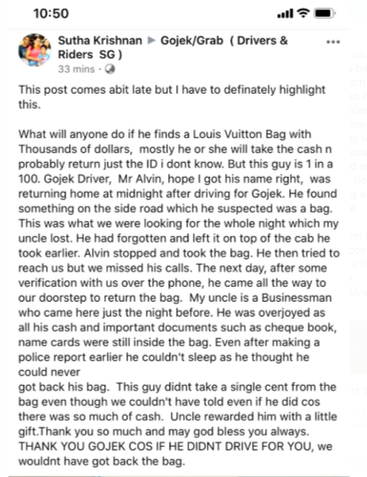 Sutha wrote: "He was overjoyed as all his cash and important documents such as cheque book, name cards were still inside the bag."

"Even after making a police report earlier, he couldn't sleep as he thought he could never [get] back his bag.

She added that Andy "didn't take a single cent" even though they would not have been able to tell as there was "so much cash" inside it.

Her uncle rewarded Andy with a small gift.

Stomp reached out to Andy after being alerted to the incident.

He said that he saw an object on the road as he was driving past at about 11pm but when he noticed it was a bag, he made a U-turn and picked it up.

"The roads were quite busy but no one seemed to have noticed it," he said.

"When I opened the bag, I was surprised to see there were a few stacks of Singapore and Malaysian currency, cheques and a few documents written in Malay.

"I looked inside to see if I could find anything to identify the owner, but only found a name card and a drivers' licence, which looked like it belonged to a Malaysian."

Andy shared it was a challenge to find the owner as the bag was in Singapore but the bag appeared to belong to a Malaysian who stays in Kuala Lumpur.

"I initially wanted to drop the item off at the nearest police station but then I thought it may be better to try to find the owner myself in case he needed the documents or money urgently," he said.

After waiting at the location he found the bag at for someone to come and retrieve it, he decided to call the Malaysian mobile number on the name card he found in the bag.

"The owner is the executive chairman of a recycling company in Malaysia," he said.

Andy shared with Stomp there were two reasons why he wanted to return the bag.

"Firstly, I was curious about the owner and why there were Buddhist prayer beads in his bag.

"I 'CSI-ed' his name through the Internet and saw one of his photos where he is holding the same identical bag which I found so I was very sure that it was his.

"Secondly, from his Facebook, I could see that he does a lot of charity work and we believe that we should do good deeds to get good karma in return."

Andy was invited to the man's niece's home after multiple attempts at trying to reach him via phone.

"He was very joyful that the bag was returned and the first thing grabbed upon opening the bag was the Buddhist beats which he said were very important to him.

"I think they had some kind of sentimental value.

"He even said that if all the money and documents were gone, it's alright, as the most important thing is the beads."

When asked about how the deed made him feel, Andy said: "I feel great!

"Seeing the joyful expression of the owner is something I will not forget as it seemed that I had found and returned a very important object in his life."