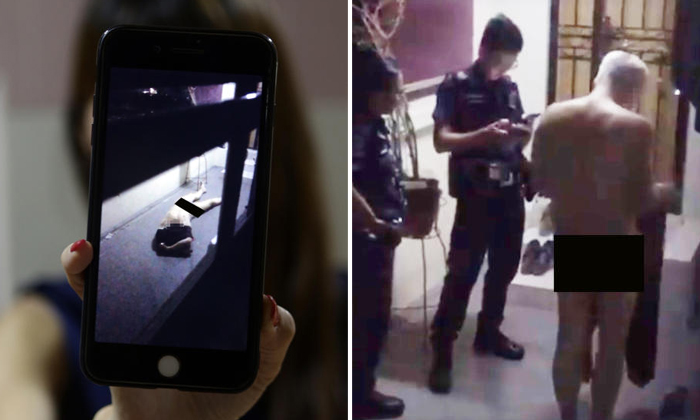 A 53-year-old man who was caught on camera removing his clothes along a corridor in Ang Mo Kio after allegedly trying to force open a resident's door is currently assisting with police investigations.

In response to a Stomp query, the police said they were alerted to a case of public nuisance at Block 150 Ang Mo Kio Ave 5 on April 30, at 12.52am.

Facebook user CharLowe LC posted videos of the man and alleged that he had been loitering along the corridor at "all times".

She also wrote: "Some more, he tried to break in my door nonstop."

In one video, the man can be seen lying flat on his back along the corridor without any pants on.

He is later seen removing his shirt.

Other video clips show police officers speaking to the man and leading him away.

The Facebook user, identified as 30-year-old Mdm Lin, told Lianhe Wanbao that she and her two-year-old daughter had been sleeping in a bedroom adjacent to the corridor while her ten-year-old daughter slept with their domestic helper in another room.

Mdm Lin's husband had yet to return home.

She recalled hearing strange noises from the corridor in her sleep and said they sounded like someone scratching the wall, prompting her to get up and investigate.

When she looked out of her bedroom window, she saw the man standing outside her unit.

According to Mdm Lin, the man knocked on her front door aggressively and tried to force it open. Fortunately, her door was locked.

"He kicked up a ruckus and repeatedly shouted 'open the door' in Mandarin and Hokkien," said Mdm Lin, who then called the police as she was worried about her children's safety.

The man then started removing his jeans and shirt, while lying on the ground and muttering to himself.

Mdm Lin added: "I did not dare to open the door, but heard him telling the police, 'Don't know where this is'. He then left with the police.

"He made a huge scene for at least two hours and frightened me. I was worried that he would come back so I shared the incident on Facebook, in hopes of alerting other residents."

Related Stories
Uncle and auntie in tug-o-war along Woodlands corridor until she pulls off his shirt
Police respond to Stomp: Auntie wields chopper at Serangoon neighbour over noise, gets tasered
Arrested: Shirtless guy runs out onto road, blocks and hits vehicles then confronts pedestrians
More About:
neighbour
public nuisance