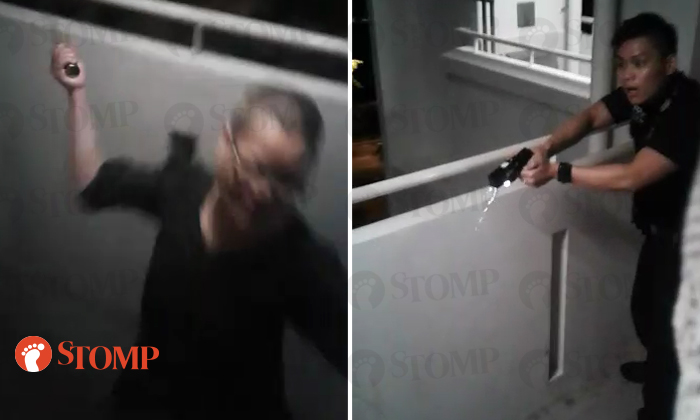 A 61-year-old woman wielded a chopper at her neighbour and engaged in a stand-off with the police at Block 157 Serangoon North in the wee hours of Christmas Day (Dec 25).

Responding to a Stomp query, the police said they responded to a case of criminal intimidation at around 4am.

A police spokesman told Stomp that preliminary investigations revealed that the woman had gone to her neighbour's unit to complain about the noise level.

The neighbour subsequently called the police.

When the police arrived, the woman was seen hitting the gate and windows of the unit with a chopper.

Despite officers instructing her several times to drop the chopper, the woman refused.

The spokesman added: "A police officer eventually deployed one cycle of taser on the woman as she continued to act violently and refused to cooperate, endangering her personal safety and that of others.

"The chopper dropped from the woman's hand as she fell to the ground after she was tasered.

"However, she was able to stand up immediately and continued to resist arrest.

"Given that the woman was no longer armed and due to her age, the officers did not administer a second cycle of the taser on her or arrest her forcibly but advised her to cooperate with the police."

The woman eventually complied with the officers' instructions and was arrested for criminal intimidation, said the police.

"She was then conveyed to Sengkang General Hospital where the doctor assessed that she did not sustain any injury. She was released on police bail on the same day," they added.

The five-minute clip begins with a stand-off between the woman and several police officers.

Shortly after, the woman is spotted waving her chopper at the person who is filming the video through a window.

The sound of glass being broken, followed by a metal clang, can be heard.

When the video cuts back to the woman again, she is seen crouched against the corridor as officers repeatedly tell her to "stay down".

However, she does not comply and soon gets back up on her feet again. When told by an officer to kneel down, she also resisted.

"Trust me? You trust me?" he also added.

To this, the auntie repeatedly said: "I want to go home and sleep."