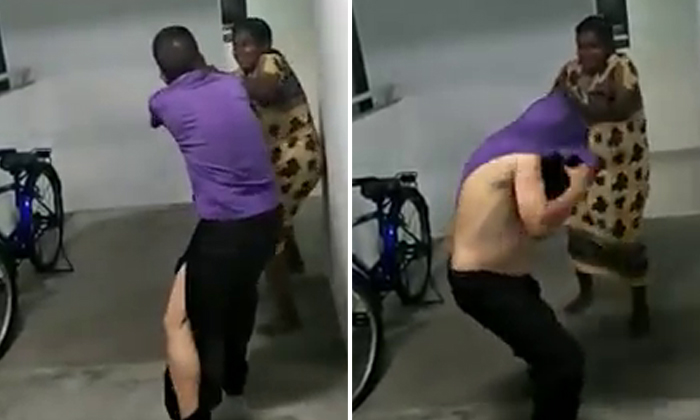 A man and a woman, believed to be former colleagues, were seen locked in a tussle along a Woodlands Crescent corridor on Thursday night (March 28).

A video of the incident was posted on All Singapore Stuff's Facebook page on March 29 and has garnered over 191,000 views to date.

In the video, the auntie and the uncle can be seen struggling with each other as someone in the background shouts: "Auntie! Stop it ah you!"

The auntie then spits on the uncle multiple times and they continue their tug-o-war until the auntie pulls off the uncle's shirt from his body.

In response to a Stomp query, the police said they were alerted to a case of voluntarily causing hurt at 10.38pm.

"The parties involved were advised on their legal recourse," a police spokesman said.

The resident who filmed the video told Lianhe Wanbao that she had been on the way home with her husband after dinner. Upon stepping out of the lift, she saw her neighbour speaking to the uncle.

Ms Zhuo, 33, said: "My neighbour lives alone, but the man did not look familiar. At that time, he was sitting on a chair outside my neighbour's unit. They seemed to know each other so I did not pay much attention to them."

At around 10.15pm, Ms Zhuo was in her living room when she heard a female voice shouting. Shortly after, the uncle knocked on Ms Zhuo's door to ask for help.

Ms Zhuo added: "The uncle asked for our help but told us not to come out of the house for our safety. He wanted us to film a video as evidence." 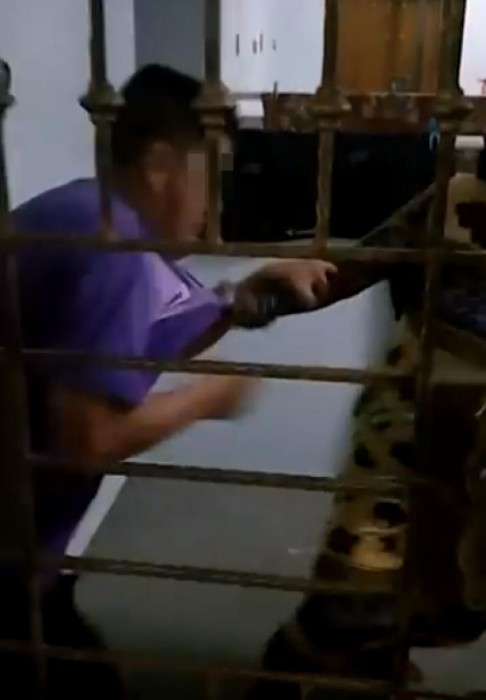 Ms Zhuo followed his instructions and subsequently called the police. She also gave the uncle a cup of water and her husband's t-shirt.

When police arrived, they separated the pair, thus putting an end to the 20-minute scene.

According to Ms Zhuo, the uncle and her neighbour had been colleagues until she was fired recently.

The uncle had apparently gone to look for the auntie at her home over an unknown matter, but she asked him to put in a good word for her with their company instead. They then got into a dispute.

Ms Zhuo recounted: "The uncle talked to the police until close to midnight and then left on his own."

When reporters visited the auntie's unit, music from within the flat could be heard but nobody answered the door.

Related Stories
Police respond to Stomp: Auntie wields chopper at Serangoon neighbour over noise, gets tasered
Business dispute between 2 couples escalates into fight that left 5m blood trail in Ang Mo Kio
Man pins woman down and tussles with her in the rain along Geylang Road
More About:
dispute
fight
woodlands