Uncle parks car on motorcycle lots, then tells biker: "Who the fish you are?" 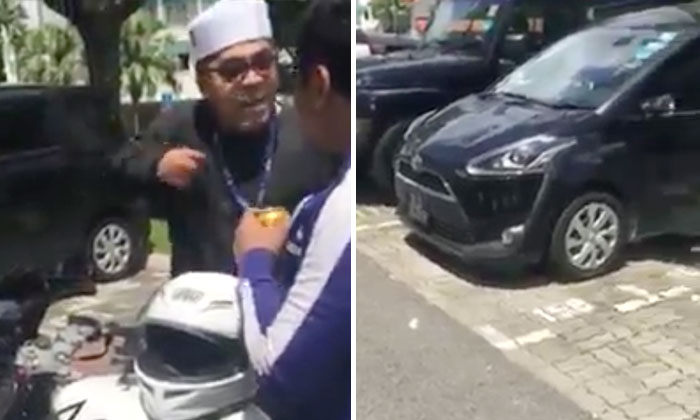 A video circulating on social media shows a man in a heated argument with a motorcyclist after the latter asked him why he had parked his car on motorcycle lots at a carpark in front of Block 30, Marsiling Drive.

According to SG Road Vigilante, the incident took place at about 1.30pm on Friday (May 25).

He goes on a tirade:

“I can be your father! What, you talking to what?

“Even if I park somewhere, it’s my problem!

The motorcyclist explains to him that he is parking on motorcycle lots, but the man insists that it is “not his problem”.

He also alleges that the motorcyclist had been rude to him.

At this point, the motorcyclist asks his wife, who had been filming the incident to take a photo of the lot with the car parked in it.

“Go and take picture. Take a picture of the lot (and) the vehicle number.

“Somebody is being very rude, you know.”

The motorcyclist goes on to say that he had merely asked the man why he was parking on motorcycle lots.

The man replies that he was is “not supposed to ask this way”, before asking the motorcyclist if it is a big issue to him.

The motorcyclist tells him that it is not, and asks the man why he is making a big issue of out of the matter by shouting.

The man tells him that he is “not happy” with the way the motorcyclist had spoken to him.

He also labels the motorcyclist a “kid”, because he isn’t “mature enough to think this way.".

The man then shouts at the motorcyclist:

“Have some respect for people!”

The motorcyclist subsequently calls the police, as the car is driven out, revealing empty car lots nearby.

Meanwhile, the man continues to taunt the motorcyclist, challenging him to call the police.

The video ends just as the motorcyclist makes a police report on the phone.

Many netizens have reacted to the video, with some siding that motorcyclist.

“Sooooo many car lots available but he and/or the driver chose to park at the motorcycle lots? And then still have the audacity to flare up? Hahaha amazing!”

“Who is your Brother uncle! You act more like a kids lor…?!

“You yourself at fault for parking llegally at motorbike lots, still want to act yaya papaya to tell other’s off?!

“Just Wait for your summons lor. Talk so much.....Bruhhhh!

However, others were more sceptical, suggesting that something could have happened that was not caught in the video.

"Wish they started to film from the beginning.

"Curious how this has been escalated like this. What has the motorcyclist said before they started filming.

"Uncle is wrong for sure but what is his story in this incident?"

Related Stories
Uncle kicks taxi and breaks windscreen wipers while little boy tries to restrain him
S'pore motorist argues with bus driver in JB after allegedly refusing to give way
Man who missed last shuttle bus argues with SBS Transit staff: "You walk back with me!"
More About:
argument
dispute
parking
Marsiling