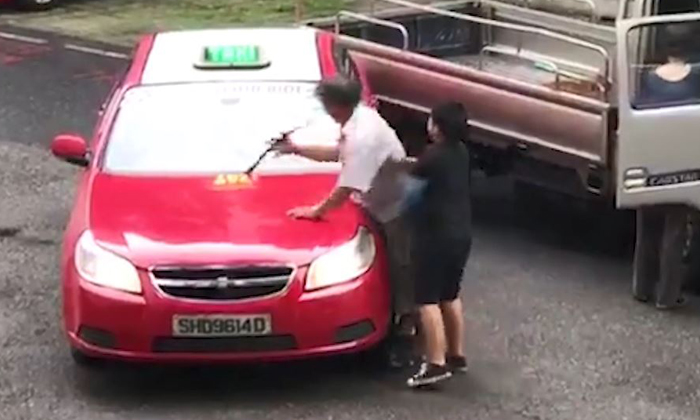 A video of an elderly man kicking and forcefully removing windscreen wipers from a taxi has been making its rounds on Facebook.

The video, which was posted in the Singapore Taxi Drivers Facebook group, shows a man banging a taxi with his fists while a woman and a little boy attempt to restrain him.

In the video, the man kept shouting at what is presumed to be the taxi driver. He also kicks the taxi and bangs the taxi with his fists several times in the video.

He also taunts the driver to 'come out' in Chinese.

A woman then attempts to restrain him and guide him back towards a lorry.

In Chinese, the woman also told the man to 'stop making a fuss' and a boy's voice could be shouting at the man to 'come back'.

At one point, he even forcefully pulled a windscreen wiper off the taxi and flung it towards the side of the taxi.

The boy then came running around in an attempt to restrain him unsuccessfully.

Later in the video, the taxi suddenly reversed into the lorry. The man then went forward again to pull a second windscreen wiper off the taxi before hurling it.

The woman who was with him was also taking pictures of the taxi.

Towards the end of the video, the man appears to have calmed down.

It is unclear what caused the angry outburst but from the video, it can be seen that the rear end of the taxi had come into contact with the lorry.