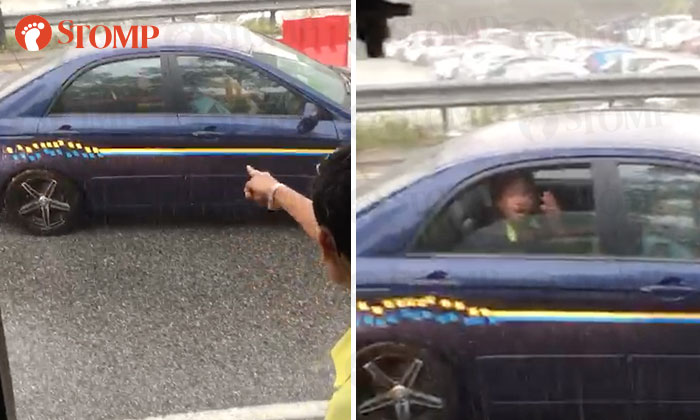 An argument broke out between a driver of a Singapore-registered car and a public bus driver in Johor Bahru, after the former allegedly refused to give way to allow space for the bus to change lanes.

A Stomper witnessed the situation which happened near the Johor Bahru Sentral Bus Terminal on Sunday (April 1) at around 4.20pm.

According to the Stomper it was raining heavily and there was a traffic jam forming.

The bus and the car were occupying the middle lane at the time of the incident, with the car in front.

The bus driver wanted to switch lanes and sounded his horn at the driver in front so he could make space for the bus.

However, the driver refused to move.

After a few minutes, the bus driver alighted the bus in the rain, went to the vehicle and spoke to the driver, after which the driver moved into the left lane.

The bus driver promptly returned to the bus.

An argument then broke out between the two drivers.

The Stomper took a video of the alteration which he sent to Stomp.

A passenger in the car then winds down his window to speak, but his reply is drowned out by the muffling sound of the rain.

Said the Stomper: "The bus driver had to get out of his bus to speak to the car driver and even then, he refused to help.

"The poor bus driver was wet all over.

"This is unacceptable. It reflects badly on Singaporeans in other countries."

Related Stories
Men argue and hurl vulgarities in the middle of road at Hougang
What's going on here? Cabby and Grab driver hurl vulgarities at each other
Uncle scolds man at Bugis Junction supermarket: "When I was your age, I was 100x more handsome than you"
More About:
Malaysia
driver
inappropriate
argue