Man who missed last shuttle bus argues with SBS Transit staff: "You walk back with me!" 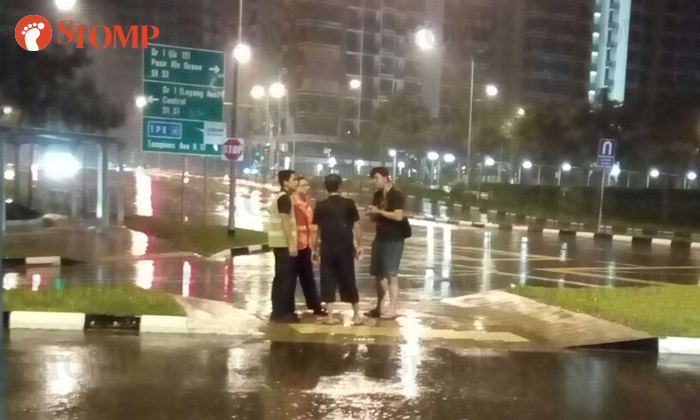 A man was seen arguing with SBS Transit staff at a bus stop in Pasir Ris Central on Jan 12.

Stomper CC, who was at the bus stop, recorded a video of the incident and sent it to Stomp.

According to the Stomper, the dispute is believed to have been started when the man had missed a shuttle bus.

At around 1.15am, the man was waiting for Bus 7 when he missed the last bus as by the time the bus had arrived at the bus stop, it was already off service.

"There is no MRT due to early closure. The bus comes from Aljunied. By the time it reached Pasir Ris, it was already too late," said the Stomper.

In a video he sent to Stomp, the man is seen arguing with SBS Transit staff at the bus stop.

"You walk back with me... We take cab we have to pay (for) ourselves you know," said the man.

The Stomper said that the man wanted the SBS staff to pay his taxi fare.

He told Stomp, "We were very worried as he looked a little drunk. So, we had backup at the bus stop just in case."

According to the Stomper, the staff then offered to call for a taxi and the man brought them to a road divider nearby despite the fact that it was raining.

A man in a black shirt said to be from Certis CISCO also came in to try to help resolve the matter.

"The SBS staff even offered to pay for his taxi fare just to end the argument there," said Stomper CC.

However, the man continued arguing with them in the rain.

It is unclear what happened after that.

"Even though SBS is taking the blame, the early closure of the MRT is not their fault," added the Stomper.

Stomp has reached out to SBS Transit for a statement regarding this incident.

Related Stories
Why is this man pushing and toppling bikes at a multi-storey carpark?
Man in Malaysian pushes and throws money at GF after she allegedly spilt water
Cabby rages at private hire driver at Changi Airport: "I will send this video to LTA!"
More About:
dispute
argue
sbs
Rain