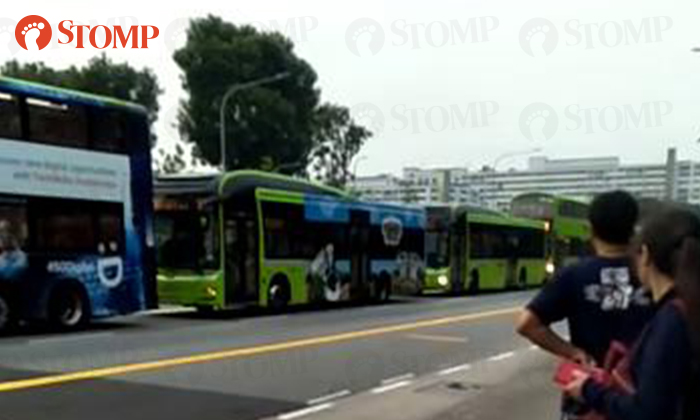 Stomper Wong shared with Stomp on Monday (Sep 9) that he only noticed the traffic jam after he heard the sound of honking from his 11th-storey flat from a Housing Board (HDB) block near the ITH.

Stomper Tinsley contributed a video of the traffic jam from this morning (Sep 10), at about 7am.

Tinsley told Stomp: "I took a bus from my house at Block 501B Yishun Street 51 and decided to stop at this bus stop opposite Northpoint City because the jam was too bad.

"The bus barely moved and my travel time was affected. I took this video as evidence to show my boss why I was late for work.

"I arrived at work about 45 minutes to an hour late, but I showed my boss the video and he understood."

In response to a Stomp query, a LTA spokesperson said: "LTA is actively working with the bus operators to fine tune ground operations at the newly opened Yishun ITH.

"Prior to the opening of the ITH, LTA had implemented a series of measures to mitigate congestion, including the widening of roads, traffic light timing adjustment and route testing.

"LTA also chose to open the ITH during the school holiday period when ridership is relatively lower and traffic is relatively lighter, so as to minimise inconveniencing commuters.

"We seek commuters’ understanding that some time is required for our bus operators to familiarise themselves with the new environment. We are monitoring the situation closely and will put in place further measures, if needed.

"We seek the understanding of commuters and residents as we improve and fine-tune the operations with LTA to deliver safe and comfortable journeys.”