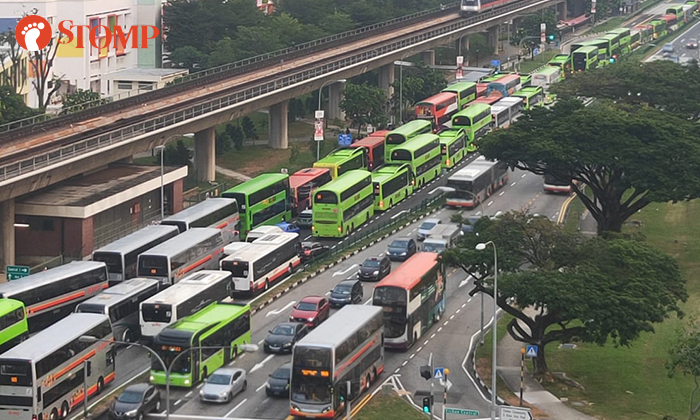 A massive traffic jam occurred on Monday morning (Sep 9) as lanes of buses merged into one to enter a new integrated transport hub in Yishun.

Two Stompers contributed photos and videos of the traffic jam.

Stomper Wong was about to leave his house for work at about 7am when he began hearing a lot of honking from his 11th-storey flat at Block 603 Yishun Street 61.

Wong told Stomp: "I heard a lot of honks and looked out of my kitchen window, then I saw the jam and was just, woah terrible.

"You can see the bottleneck right under the overhead bridge there. The multiple lanes of buses merge into one." 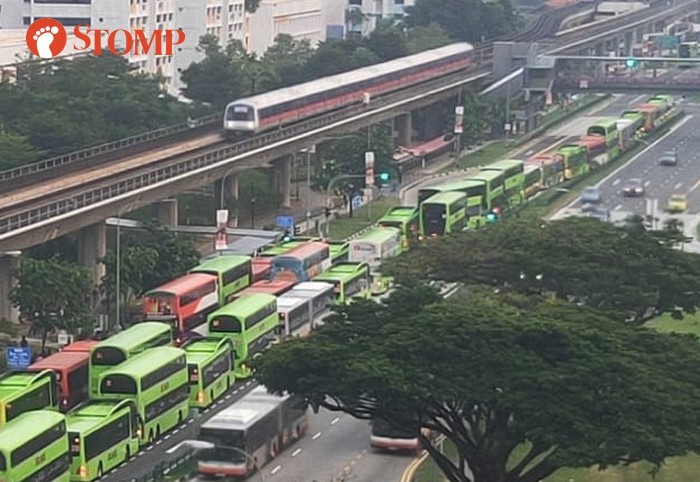 "Traffic towards Northpoint City was essentially stagnant, the buses cannot move but luckily I wasn't affected when on the way to work."

Stomper Lee was walking along Yishun Avenue 3 when he noticed the jam as well.

He told Stomp: "It was about 7.25am and I saw rows of buses coming from both directions. Never seen so many buses there before.

"Maybe it is due to the new interchange that was opened yesterday (Sep 8)."

According to Lianhe Zaobao, 20 over buses were waiting to enter the new integrated transport hub during the peak hours this morning (Sep 9). This resulted in a line of buses that stretched to be about 150 metres long, which led to a traffic jam that saw many frustrated commuters.