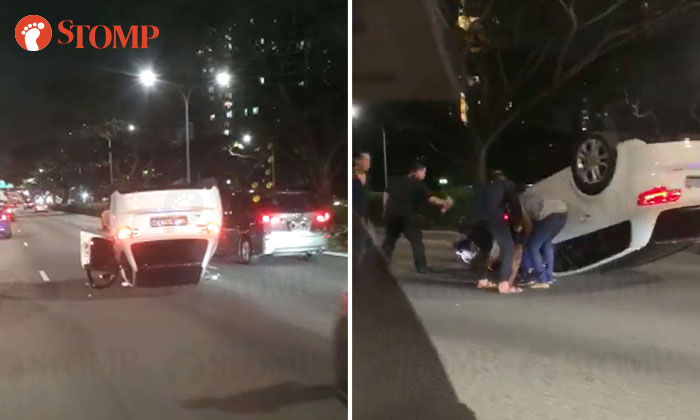 An Audi overturned in an accident along the East Coast Parkway (ECP) on Wednesday night (June 12).

Stompers Zinon, KC, Jasmin and KS alerted Stomp to the incident. Zinon shared a photo he took while passing by the overturned car while the others forwarded videos that have been circulating online.

In the videos, passers-by appear to be helping the driver out of the car and extinguishing flames coming from the car's engine.

Zinon said that the accident caused a massive traffic jam while Jasmin received a WhatsApp message advising all drivers to avoid using the ECP after Bedok.

At 8.42pm, the Land Transport Authority (LTA) tweeted that an accident had occurred on the ECP towards the city with traffic congestion until the Still Road South exit.

In response to a Stomp media query, the Singapore Civil Defence Force said it was alerted to the accident near the Fort Road exit at about 8.30pm.

No assistance was required, a spokesman said.

The police told Stomp they were alerted to the accident at about 8.25pm.