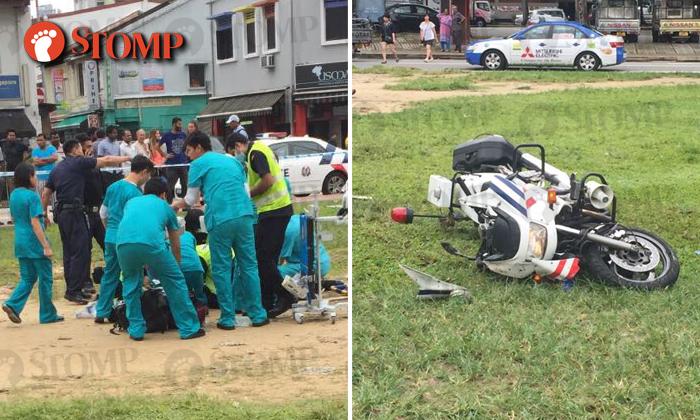 A 29-year-old Traffic Police officer died in the line of duty after being involved in an accident along Serangoon Road at around 10.40am this morning (Jun 1).

In a news release, the Singapore Police Force (SPF) said:

"Staff Sergeant Nadzrie Bin Matin was involved in a traffic accident this morning along Serangoon Road at about 10.40 am while he was performing traffic patrol duties.

"He was conveyed to the Tan Tock Seng Hospital where he subsequently succumbed to his injuries and passed away.

"Staff Sergeant Nadzrie joined the Singapore Police Force in 2009 and was posted to the Traffic Police after he had completed his training. He was 29 years old.

"Commissioner of Police Hoong Wee Teck expressed his deepest condolences to the family, 'I am deeply saddened by the sudden loss of Staff Sergeant Nadzrie. He was a dedicated and well-liked officer. We will do everything possible to assist his family during this difficult period.'

"The Police would like to appeal to members of the public not to circulate videos or images of the deceased out of respect for his family.

"The 52-year-old driver of the vehicle involved in the accident has been arrested for a negligent act causing death. Investigations are currently ongoing."

According to Stomper King, the victim had apparently been involved with an accident with a van.

Stomper Mike also sent Stomp photos that he said his friend had taken at the scene earlier today (Jun 1).

The images show the victim lying face-down on a field in a big pool of blood, as police officers attended to him and onlookers watched.

A Traffic Police bike can also be seen on the grass nearby, with debris strewn around.