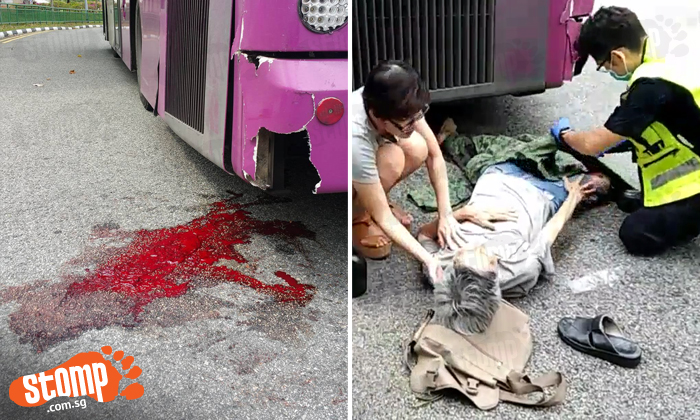 SBS Transit has responded to the incident after queries by Stomp.

"We are very sorry that this has happened.

"Our top priority now is the well-being of the injured pedestrian. We have been to the hospital and are in touch with his family and will render assistance to them as best as we can. We are also assisting the Police in their investigations."

An accident involving a 77-year-old male pedestrian and a bus occurred at Bishan Street 13, outside Bishan Bus Interchange, earlier today (May 19) at around 1.57pm.

A Stomper alerted Stomp to the incident and sent photos showing the vehicle with its rear damaged, as well as a large pool of blood on the road.

According to him, the bus had ran over the man, who was subsequently sent to hospital.

"The pedestrian is a male Chinese in his 70's.

"Both of his legs were rolled over by the rear left tyre of the bus, causing his legs to become twisted and 'distorted'."

Stomper Haimi also contributed a video of the scene, which shows the injured man lying on the road and authorities rendering their assistance.

In response to media queries by Stomp, the Singapore Civil Defence Force (SCDF) said that they were alerted to the incident at 1.57pm and dispatched one ambulance to the scene.

The victim was conscious when conveyed to Tan Tock Seng Hospital, a Police spokesperson told Stomp.

Related Stories
Wait, what? Man injured with glass in throat after chair smashes into car on CTE
3 injured after Mitsubishi turns turtle in accident with taxi at junction of Xilin Ave and Changi South Ave 1
accident
blood
injured