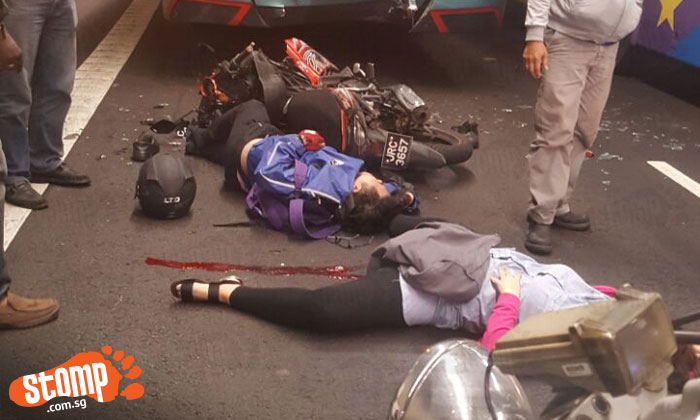 A motorist and his pillion rider were injured after crashing into the back of a bus while riding along the Ayer Rajah Expressway (AYE) towards Tuas yesterday (Apr 28) at 10pm.

Stomper Anwar saw the two of them lying on the road as he approached the scene of the accident from behind.

"I did not see the moment when they crashed into the bus but when I saw them lying on the road, I stopped to call 995," said Anwar.

Anwar then assisted the accident victims by removing their helmets to allow them to breathe and tried to keep them awake before the ambulance came.

"There was blood on the road and most of it was coming from the lady pillion rider.

"It appeared to be coming from her back but after a while, the bleeding stopped."

According to the Singapore Civil Defence Force (SCDF), the man suffered spinal injuries while the woman suffered multiple fractures.

Other motorists stopped at the scene to offer assistance by diverting traffic.

Two ambulances arrived at the scene to convey the injured to National University Hospital (NUH).

"I just managed to take a couple of photos while we were stuck in traffic," said Maria.

"Authorities were in the vicinity and taking care of the traffic jam.

"On 28 April 2017 at 10.07pm, the police were alerted to an accident involving a bus and a motorcycle along the AYE towards Tuas.

"The 32-year-old male motorcyclist and 31-year-old female pillion rider were conscious when they were conveyed NUH.