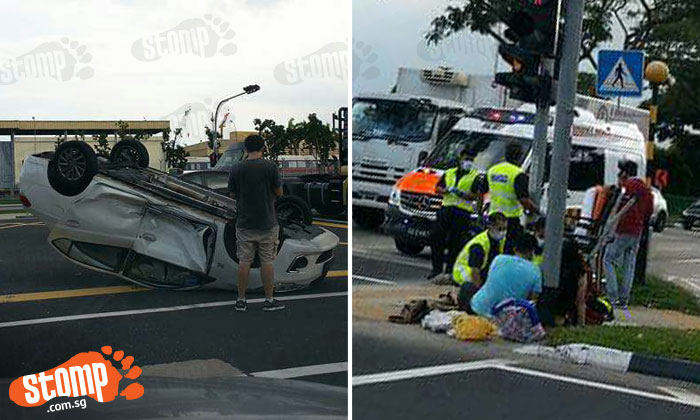 Submitted by Stomper Roger and Dean

A car overturned at the junction of Changi South Avenue 1 and Xilin Avenue today (Apr 17) at around 4.45pm after an accident with a taxi.

Photos sent by Stompers Roger and Dean show an overturned Mitsubishi on the perimeter of a yellow box at the junction and a taxi nearby.

The white Mitsubishi had a huge dent on its left side, suggesting that it was hit there in the accident.

Stomper Roger who was at the scene reported hearing a loud bang before driving past the overturned car.

He said that he saw saw three people who were involved in the accident sitting on the pavement and getting help from passersby.

The SCDF then arrived shortly after.

Responding to a Stomp query about what happened, an SCDF spokesperson said:

"We received a call about the accident at around 4.33pm and dispatched two ambulances.