Tiles 'pop out' in HDB flats at multiple estates in S'pore, 'fall apart' at Toa Payoh 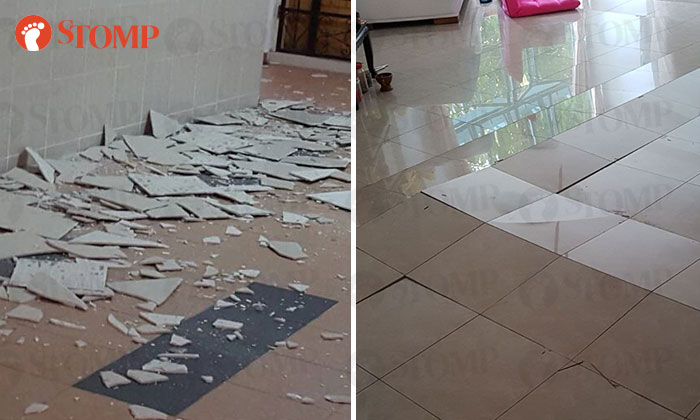 Residents in various HDB flats across Singapore have experienced the ‘popping’ of their floor tiles within the last few days, with cases reported at Toa Payoh, Fernvale and Woodlands .

Stomper Bala, who stays at Block 407B in Fernvale Road, was in his living room watching television on Sunday (Jan 14) at around 11.30pm, when he started hearing a popping sound coming from his floor.

At first, he thought that the noise was coming from the ceiling of his neighbour below.

Concerned, he went down to warn his neighbour.

As he and his neighbour were talking, the next-door resident overheard their conversation and told them that he too had experienced the ‘popping’ sounds and there was nothing to worry about.

Bala then went back to his house, but the sounds became increasingly louder.

It went on for about three to four minutes, as the tiles on the floor started ‘swelling’, before cracking.

Said Bala: "My children were all panicking. They thought the whole ceiling was going to come down.

"I have never encountered this before."

Bala contacted the Ang Mo Kio Town Council the following morning (Jan 15) and also called estate manager, who came down to survey the damage at 10.40am.

Bala added: "She (the estate manager) said that she will speak to a contractor about the tiles. She got workers to help us clear the broken tiles.

"The broken tiles have sharp edges so they can be dangerous.

"In the meantime, there are parts of the floor are bare."

Stomper Eve also encountered the same phenomenon in her flat at Woodlands Drive 75.

She told Stomp that she and her husband were talking to a neighbour from the 16th floor on Sunday (Jan 14) at around 3.30pm.

After their discussion, the couple headed back to their living room.

It was then the ‘cracking’ sound started, lasting for 10 to 15 minutes. The noise became progressively louder.

Eve described her the incident: "I was walking to the kitchen when the tiles ballooned and then burst.

"The sounds were quite soft at first. We realised later it was the sound of the tiles getting detached from the floor."

After the incident, Eve spoke to her neighbour from the 16th floor, and they discovered that they were not the only ones affected.

According to Eve, over 12 units in the area were affected and residents have since formed a WhatsApp group.

Upon inspecting some discarded tiles from the units, they realised that some of the tiles had only been partially glued.

Said Eve: "We have arranged to meet the MP (Member of Parliament) tonight.

"Most of the residents here are second-hand owners, so we don’t know when the warranty will end.

"All these could be due to poor workmanship.

"My house’s tiles were done through an HDB-approved contractor.”

Stomper Shui also took pictures of a pile of shattered tiles at the corridor of his block in Toa Payoh.

Stomp has contacted the relevant authorities for more details on the incidents.

Related Stories
Sudden crack of tiles at Telok Blangah coffee shop: 'I was saved by my daughter's decision'
Serangoon North flat owner spooked by 'violent' cracking of tiles: "I thought it was an earthquake"
Family forced to run out of HDB flat after kitchen tiles crack in the middle of night
Tiles suddenly 'pop' off wall at lift lobby of Blk 547 Woodlands Dr 16
More About:
hazard
breakdown
damage