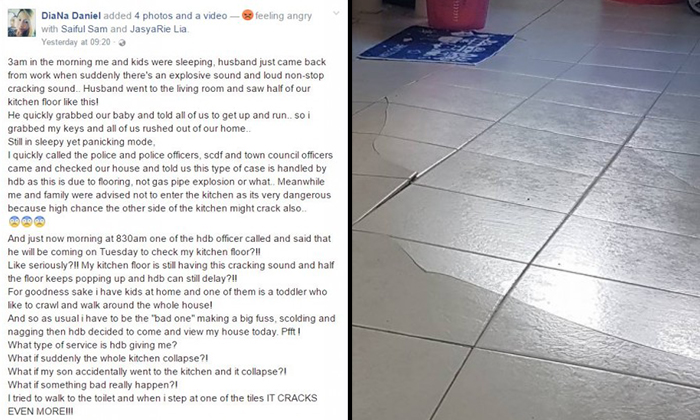 A family was left shocked and worried after their kitchen's floor tiles cracked and popped in the wee hours of the morning on Friday (Mar 10).

In a Facebook post, DiaNa Daniel said she and her kids were sleeping when her husband, who had just returned from work, hear a loud, cracking sound.

He looked from the living room and realised half the kitchen floor had cracked and popped.

DiaNa said he quickly grabbed the baby and told the rest to run out of the house.

After getting outside, Diana quickly called the police and SPF, SCDF and Town Council officers soon showed up.

They told the family that HDB will have to look into this as the issue was with the flooring, and it was not because of a gas explosion.

The officers also told the family not to enter the kitchen as it was very dangerous.

DiaNa says that when she reported the matter to HDB, an officer called her at 8.30am to tell her that they would come down on Tuesday (Mar 14), to check on the issue.

Worried about her kids, DiaNa argued with the HDB officer and managed to get them to come on that day itself to inspect the home.

Related Stories
Floor tiles 'pop out' of ground at Beauty World MRT Station
Muddy water gushing out of cracks on road opposite Ten Mile Junction LRT Station turns area into pool
Normal or not? Students told not to be worried about cracks on dormitory building
HDB
flat
cracks
breakdown