Sudden crack of tiles at Telok Blangah coffee shop: 'I was saved by my daughter's decision' 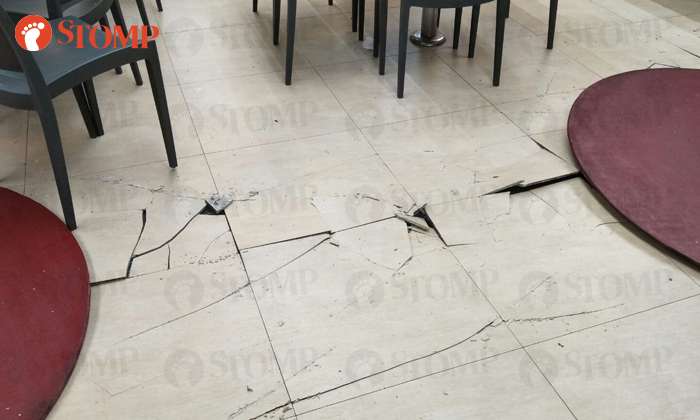 Stomper Angela was at the scene and witnessed the incident, which occurred at about 8pm.

She told Stomp: "We were having dinner when we heard a pop sound and suddenly, the floor started to crack.

"Diners quickly rushed out and some left their dinner behind."

The Stomper also shared how she had initially gone to sit indoors at the coffee shop, before the tiles cracked, but changed her mind last minute because of her daughter.

"I had actually gone to sit there but my daughter requested to sit outside. I was saved by her decision," said Angela.

She added: "The coffee shop staff later placed table tops on the floor to cover the cracks.

"A reporter and photographer from Shin Min Daily News turned up after I alerted them.

"Later, there was also a television crew who came down to film and interview, but my daughter declined to be interviewed.

"It was such an eventful night until I had no mood to eat."

Angela also described the coffee shop owner to be "very annoyed" by the presence of the media and said: "The owner even told me off but I said I had every right to report this as I was a diner there."

Stomp has contacted the authorities for more details.

Browse the gallery for more photos of the cracked tiles.

Related Stories
Serangoon North flat owner spooked by 'violent' cracking of tiles: "I thought it was an earthquake"
Family forced to run out of HDB flat after kitchen tiles crack in the middle of night
Tiles suddenly 'pop' off wall at lift lobby of Blk 547 Woodlands Dr 16
More About:
breakdown
damage